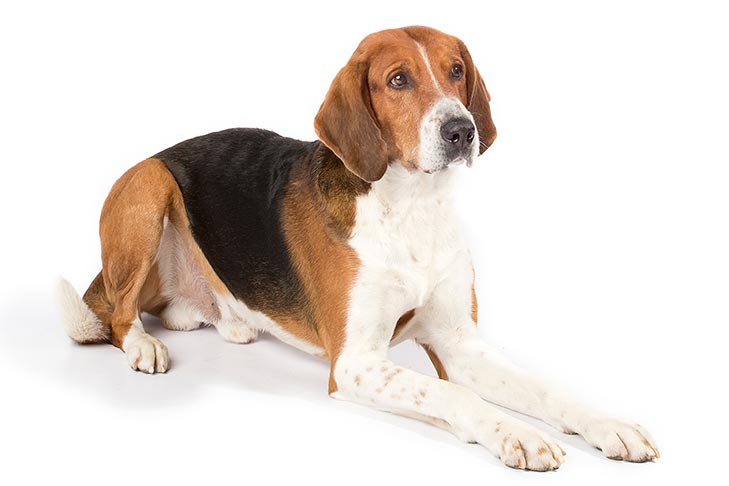 The American Foxhound is slighter of bone and higher on leg that the English Foxhound, with more rear angulation and arch over the loin. These attributes allow greater speed and agility over rough terrain. The American Foxhound has a melodious voice when on the trail. The coat is hard and of medium length. The expression is gentle and pleading.

This most American of breeds dates back to 1650, with the first record of fox-chasing hounds arriving from England. By the 1700s, riding to the hounds had become extremely popular with the upper class; even George Washington found it a favorite pastime. George Washington crossed descendants of these early foxhounds with French foxhounds the Marquis de Lafayette gave him, and these dogs are behind the American Foxhound. Imports from England, France, and Ireland helped further shape the breed. Foxhound pedigrees have been recorded in America since 1850. Around this same time, the sport spread to the southern United States, particularly the mountains of Kentucky and Tennessee, and hunters there preferred a faster dog with the ability to start and chase a fox alone, and also to give chase to deer. The dogs became more streamlined than their English counterparts. The dogs further developed into different strains, the most popular being the Walker. This strain descends from a dog named Tennessee Lead, alleged to have been stolen from a deerchase by a dog trader, who subsequently sold him to George Washington Maupin. His breedings to this fast running foxhound produced some of the best running dogs seen to that time. Dogs from that strain were subsequently called Walker hounds. Other strains of foxhounds include Trigg, Goodman, July, Calhoun, and Hudspeth. These dogs eventually became specialized as either running hounds or show hounds, with the former being even further specialized as competitive field trial hounds and pack hounds. The pack type is generally considered the prototypical Foxhound. These dogs combine great speed, endurance, and jumping ability with a strong nose and willingness to give chase as a pack member. In 1886, the American Foxhound became one of the earliest breeds to be registered by the AKC, although registrations have never been particularly high. The low AKC registration numbers belie the Foxhound’s popularity, however, because most Foxhounds are kept by those with little interest in AKC registration. The Foxhound can thus lay claim to being one of the most unpopular popular breeds in America.

Although by tradition the Foxhound was not a house pet, this dog is well mannered in the home. Foxhounds get along best with human or canine companionship. They are tolerant, amiable, and gentle dogs, even though they are not very demonstrative. Most are reserved with strangers. This dog needs daily exercise in a safe area. Once on a scent, the Foxhound will follow gleefully, heedless of commands. This is a dog that bays and likes the outdoors, and is not usually defined as a city dog.

The Foxhound needs daily exercise, preferably in the form of a long walk or jog. If allowed to run off leash, this breed should only be in a safe enclosed area. The coat is easily maintained, requiring only occasional brushing to remove dead hair.