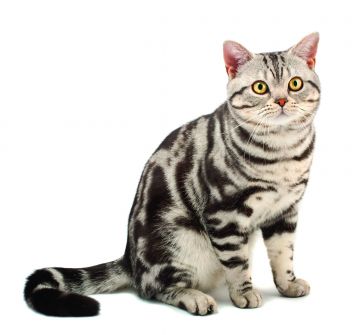 The American Shorthair is a true breed of working cat. The general effect is that of a strongly built, well balanced, symmetrical cat with conformation indicating power, endurance, and agility.

When describing the American Shorthair, the expression “happy medium” springs to mind. These all-American cats are medium in size, build, type, and temperament; they are neither too big nor too small, not overly cuddly nor distant, neither couch potatoes nor hyperactive. The American Shorthair is the perfect breed for those who want a cat that enjoys being in your lap but not in your face. American Shorthairs are known for their adaptable temperaments and quiet voices; they are sociable, easily trained, and adapt well to other animals and children. They generally do not like to be picked up; like their Pilgrim companions who left England to find freedom, they cherish their independence. Because of the American Shorthair’s history as a working cat, they make great companions in terms of health, strength, and vitality. American Shorthairs enjoy a good romp with their favorite humans, but can amuse themselves with a ball of paper just as well. They tend to remain active and playful well into their old age. Due to their barn cat background, ASHs have strong hunting instincts and enjoy catching and killing catnip mice—and real ones, too, if given access to the great outdoors, something that’s discouraged by breeders. Your indoor ASH will put presents on your pillow, usually well-killed catnip mice, and proudly wait for the well-deserved petting and praise.

No one knows exactly when domestic cats first set paw in America. However, it’s clear that cats arrived with the Europeans settlers, since America has no indigenous cat species from which domestic cats could have developed. Since cats were often kept aboard ships to protect the grain and other foodstuffs from rodents, it’s not surprising that domestic cats first appeared in North America when the Europeans arrived; North America has no indigenous species from which domestic cats could have developed. Domestic cats may have been catting around the New World since the 1500s. Unquestionably, domestic cats were present in Jamestown, the first permanent British colony in the New World, since a written record dating from 1609 mentions the colony’s cats. On July 4, 1776, when the members of the Continental Congress assembled in Philadelphia to adopt the Declaration of Independence, the American Shorthair’s ancestors were around to witness the historic event. They were too busy ridding the barns and fields of mice to put their paw print alongside Thomas Jefferson’s signature, but they heartily approved of the document. After all, cats declared their independence thousands of years ago and hold the concept dear to their hearts to this day. Cats became working members of American society, performing that age-old service as the perfect mouser. Function was far more important than form, and folks paid little attention to the color, pattern, and body style of their mousers. Through natural selection— since life in those days was hard on cat and human alike—these feline immigrants developed powerful muscles, strong jaws, and hardy, healthy constitutions. In time, life became easier, and cats became more than mere mouse-catchers as people began to take an interest in the beauty of the feline form. At first, American Shorthairs were welcomed in the newly formed American cat fancy in the late 1800s. At that time, the breed was merely called Shorthair. Later, the breed was renamed Domestic Shorthair. The first American Shorthair to be registered in this country was an orange tabby male named Belle that ironically was imported from England in the early 1900s. It wasn’t until 1904 when the first American-born American Shorthair (named Buster Brown) was registered under the breed name of Shorthair. With the import of foreign breeds, the familiarity of the ASH no longer worked in its favor. Early in the 1900s, fanciers became more interested in the imported breeds like the Persian and Angora than in the familiar ASH that had warmed their laps and served them faithfully for so many years. The foreign imports crossed with the ASH, and the pure bloodlines of the American native became diluted. In the early 1900s, a group of fanciers who loved the sturdy look of their proud all-American cats began a selective breeding program to preserve the natural beauty, mild temperament, and hardiness of the American Shorthair. However, acceptance in the show ring was a long time coming. As late as the 1960s American Shorthairs were still treated like the strays of the cat fancy. Breeders also battled confusion between their carefully bred American Shorthairs and random-bred domestic cats. While a non-pedigreed domestic cat may look something like a pedigreed American Shorthair, the mix of genes means that a random-bred domestic generally will not breed true; you cannot count on type, temperament, and length of hair as you can with a pedigreed American Shorthair. In the late 1950s a number of ASH breeders, hoping to “improve” the breed and introduce new colors, began crossbreeding Persians into their American Shorthair lines. As a result, the American Shorthair body style and head type began to change, becoming more Persian in style. The face broadened and flattened, the eyes became rounder, the ears shorter. However, many American Shorthair breeders, who had struggled for decades to promote the natural beauty of the ASH, were dismayed at the changes. The American Shorthair standard was subsequently amended to disqualify any cat showing evidence of hybridization. In September 1965, breeders voted to change the breed’s name to “American Shorthair.” With the brand-new name came a brand-new image, and the breed finally received some of the esteem it deserved. The same year, CFA named a silver tabby male (Shawnee Trademark) Best Cat, and the breed finally began to receive some hard-earned respect in the cat fancy. Today, the American Shorthair is one of the most popular shorthairs, a fitting status for America’s hometown breed.

Solidly built, powerful, and muscular with well-developed shoulders, chest, and hindquarters. Back broad, straight and level.

Large and wide with upper lid shaped like half an almond cut lengthwise and lower lid shaped in fully rounded curve. At least width of one eye between eyes. Outer corners set very slightly higher than inner corners. Bright, clear, and alert.

Medium long, heavy at base, tapering to abrupt blunt end in appearance but with normal tapering final vertebrae.