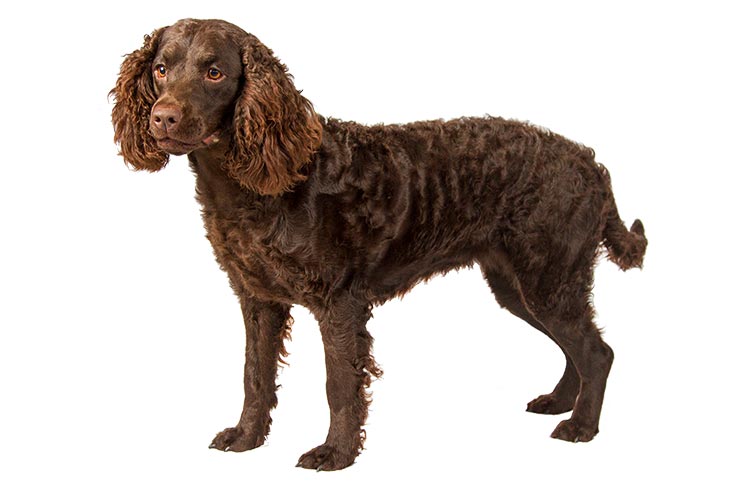 The American Water Spaniel packs a lot of ability into a comparatively small dog. This breed’s muzzle is long and strong enough to carry a large goose, and has strong quarters to propel through water and over land. This dog is slightly longer than tall, solidly built and muscular. The coat can range from uniform waves (marcel) to close curls, with a dense undercoat. This combination provides protection against weather, water, or briars. The ears are well covered with hair, which should not grow into the ear canal. The gait is balanced, with reach and drive.

Exactly when and where, or from what the American Water Spaniel was developed was never recorded. The breed’s appearance strongly suggests a smaller version of the Irish Water Spaniel, and it is likely that this dog is derived from that breed or its earlier versions, the Northern, Southern, and Tweed Water Spaniels. The Curly-Coated Retriever and its forebear, the English Water Spaniel, may also have played a role. Some theories even credit the American Indians who lived in the Great Lakes regions as the creators of the breed.

Whatever its origin, the American Water Spaniel first became established as a recognizable breed in the midwestern parts of the United States, where it was unsurpassed as a hunting companion. This small dog, then called the American Brown Spaniel, with the waterproof coat and keen nose could hunt through rough thickets, spring game, and retrieve all manner of game from land and water, often marking several fallen birds before retrieving them all unfailingly.

As this breed’s name implies, the American Water Spaniel is a natural lover of water. Not only are they skilled and versatile retrievers, but they are also tractable fun-loving family dogs—as long as they get regular physical and mental exercise. American Water Spaniels are sensitive and willing to please. Some can be timid. Generally good with other dogs in the household, some are assertive and should be introduced carefully to new dogs and household pets. Barking is frequent; some also whine or drool.

The American Water Spaniel needs daily exercise, although this requirement can be met with a long walk. The coat is oily and needs weekly brushing. Hair may be groomed from the feet and topknot. Ears should be checked regularly.