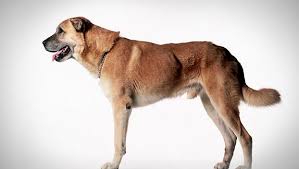 The Anatolian is built tough to do a tough job. This is a large, powerful, rugged dog, having both great agility and endurance. The Anatolian has good bone and a large head, plus a powerful, smooth, and fluid gait. This breed’s coat consists of a thick undercoat and an outer coat that ranges from short (about 1 inch) to rough (about 4 inches), slightly longer around the neck and mane. The expression is intelligent, and the general impression is one of a bold yet calm protector.

The Anatolian Shepherd is an ancient guardian breed with a long working history. This dog’s roots probably lie in the Tibetan Mastiff and Roman Mollosian war dogs that came to Turkey more than 4,000 years ago. Here they proved invaluable as staunch defenders of livestock against formidable predators, including wolves and bears. They accompanied the nomadic shepherds and became widespread over a large geographical region, accounting for the Anatolian’s great variation in size, coat type, and color. Several traits that remained constant throughout all the breed, however, are loyalty, independence, and hardiness.

The name Shepherd is a misnomer because the breed was never used as a herder. This breed’s Turkish name, koban kopegi, means shepherd’s dog. There is disagreement over whether the Anatolian is a separate breed from the Kangal (or Karabash) dog.

The first of the breed did not come to America until the 1950s, where although they proved themselves as effective livestock guards against coyotes and other predators, they remained relatively unknown. Only in the late 1970s and 1980s did the Anatolian Shepherd begin to be more widely appreciated, still valued for its utilitarian, rather than cosmetic, attributes. Pet owners desiring a loyal and effective guardian began to acquire the breed. In 1996, the Anatolian Shepherd was accepted in the AKC Working Group, and they continue to have strong working instincts above all else. Anatolians are used for cheetah conservation in Africa by protecting livestock from cheetahs.

This is a serious dog, devoted to his family and duty as family protector. At the same time, Anatolians are laid back and easygoing, never on the lookout for trouble. They are suspicious of strangers and are territorial. While good with children, they may not be playful enough to satisfy children’s desires. As a serious watch dog, this dog tends to bark a lot when his suspicions are aroused.

The Anatolian Shepherd needs a chance to exercise every day, either with a long walk or brisk run, and needs to socialize with his family. Coat care is minimal, consisting only of a weekly brushing to remove dead hair.