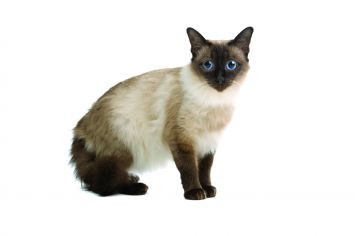 The Balinese is often a svelte cat with long tapering lines, very lithe but strong and muscular. The Balinese is unique with their distinct range of colors and silky coat that hides a supple and athletic body.

Since the Balinese and the Siamese are closely related, they share many traits. Like the Siamese, Balinese are curious, outgoing, intelligent cats with excellent communication skills. They are known for their chatty personalities and are always eager to tell you their views on life, love, and what you’ve served them for dinner. They often keep up a running monologue; they are not for those who think cats should be seen and not heard.

Balinese are often in tune with your moods and will be right there to cheer you up if you’re sad or to share your joy when you’re happy. Vocal themselves, they may respond to your tone of voice, and a scolding tone may hurt their sensitive feelings. A coaching tone and positive reinforcement are the only effective way for correcting unwanted behavior.

Balinese are agile and athletic, and if allowed will hitch a ride on the shoulder of any willing member of the family. They love to play and easily learn to fetch, bringing the ball or toy back for repeated throwing. They keep you entertained with their antics, but have a loving, devoted disposition as well. They can be quite assertive in their requests for attention, but also possess a special dignity particular to the Balinese and Siamese breeds.

In the early 1900s, longhaired kittens began appearing spontaneously in otherwise shorthaired Siamese litters. Some believe the recessive gene for long hair was introduced into the European Siamese gene pool after World War I. Since the Siamese was nearly obliterated during the war, other breeds and some mixed-breed domestic cats were used to revitalize the breed. The Turkish Angora, a breed with a silky semi-long fur similar to the Balinese coat, was thought to have been one of the breeds used.

Others believe that the recessive gene for long hair is simply a naturally occurring mutation. Both hypotheses have been disputed, and both have their reputable proponents, but no one really knows for sure. Regardless of how the long hair gene was acquired, the occasional longhair kittens were quietly given away.

In the 1940s, some people eventually thought these cats might be a good addition to the existing cat breeds. These longhaired cats began to be promoted and known as the Balinese. The Balinese name was intended to compare the cat’s graceful movements and flowing lines to those of the colorful dancers of Bali. In those early days, Balinese cats often had heavier boning and thicker coats than the Siamese.

On May 1, 2008, the Javanese officially became a color division of the Balinese, and in 2010 a single standard was adopted, fully combining the two breeds. In addition to sealpoint, chocolate point, blue point, and lilac point, the Balinese palette now includes twenty-two additional colors.

Long, tapering wedge; medium size in good proportion to body. Wedge generally starts at nose and flares out in straight lines to tips of ears forming a triangle, with no break at the whiskers. Muzzle fine, wedge-shaped. Nose long and straight, a continuation of the forehead. Usually, no less than the width of an eye between the eyes.

Large, pointed, wide at base, continuing the lines of the wedge.

Almond shaped; medium size; neither protruding nor recessed. Slanted toward nose in harmony with lines of wedge and ears. Eye color is oftentimes deep, vivid blue.

Leg bone structure long and slim; hind legs higher than front. In good proportion to body. Paws dainty, small, and oval. Five toes in front and four in back.

Bone structure long, thin, tapering to a fine point. Tail hair spreads out like a plume.

Medium length, longest on the tail; lying close to the body. Fine, silky, and without downy undercoat, may appear shorter than they are.

Body even with subtle shading. Sometimes darker color in older cats is seen, but there is often a definite contrast between body color and points. Mask, ears, legs, feet, tail dense and clearly defined. Mask usually covers entire face including whisker pads and is connected to ears by tracings.