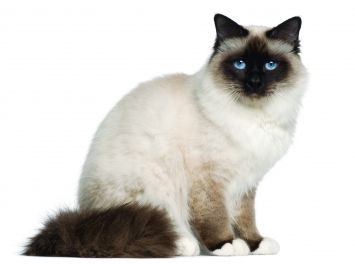 A cat of mystery and legend, the Birman is a colorpointed cat with long silky hair and four pure white feet. They are often strongly built, elongated and stocky, neither svelte nor stocky. Their distinctive head has strong jaws, firm chin, and medium length nose.

Birmans are affectionate, gentle, and faithful companions with an air of dignity that seems to invite adoration by their families. As former temple cats, Birmans seem to have become accustomed to adoration. They are very intelligent and affectionate, according to some, are often very people-oriented. They will generally greet visitors with curiosity rather than fear. Because of their gentle temperaments, Birmans are usually easy to handle, care for, and they make ideal pets for anyone who wants quiet companions that will offer love and affection.

According to the centuries-old legend, pure white cats resided in the Buddhist temples of the country of Burma (now Myanmar), and were revered as the feline carriers of the souls of priests who had departed the mortal plain. (The term for this process is transmutation, which means to change from one form to another.) The Goddess of transmutation, Tsim-Kyan-Kse, was worshiped in these temples, represented by a golden statue with glowing sapphire eyes. Mun-Ha, a priest and worshiper of Tsim-Kyan-Kse, served at the temple of Lao-Tsun. Every evening Mun-Ha’s faithful companion Sinh, one of the 100 sacred white cats that lived at the temple, joined Mun-Ha for his evening prayers in front of the golden statue.

One day, marauders from Siam raided the temple for its riches and struck down Mun-Ha. As Mun-Ha lay dying, Sinh put his paws on Mun-ha’s head and faced the statue of Tsim-Kyan-Kse. Suddenly, Sinh’s white fur changed to a beautiful golden hue, his face, tail, and legs darkened to the color of the earth, and his eyes changed from yellow to a deep, sapphire blue. Sinh’s paws, however, remained white as a symbol of Mun-Ha’s pure spirit. The next morning, all the temple cats had undergone the same transformation. For the next seven days Sinh refused all food and finally died, carrying Mun-Ha’s spirit into paradise.

The more scientific, and less romantic, story of this breed, also called the Sacred Cat of Burma, begins in 1919, when a pair of Birman cats arrived in France. Two different accounts are associated with this pair of cats and, like the legend, neither can be documented. The first one alleges that around the beginning of the twentieth century, the temple of Tsim-Kyan-Kse was again raided. Two Westerners, Auguste Pavie and Major Gordon Russell, helped some of the priests and their sacred cats escape to Tibet. When the two returned to France in 1919, they were given a pair of Birman cats by the grateful priests.

In the second and less heroic account, an individual named Mr. Vanderbilt bought the pair of Birmans from a disgruntled servant of the temple of Lao-Tsun. In both accounts, the male cat, Maldapour, died on the ocean voyage to France, but the female, Sita, arrived in France pregnant with Maldapour’s offspring, and became the European foundation of the Birman breed.

The breed flourished, and in 1925 the Birman was formally recognized in France. The breed was enjoyed in that country until the chaos of World War II, when the breed almost became extinct. At one point, the Birman breed again dwindled to a single pair of cats. It took many years to reestablish the Birman; the breeds used to revive the breed were likely Persians and Siamese (and possibly others, such as the Turkish Angora), but by 1955 the breed had achieved its former glory.

In 1959, the first pair of Birman cats arrived in the United States, and in 1967 CFA officially accepted the Birman. Since then, the Birman has flourished in North America and has become a popular and well-known breed. Today, the Birman is one of the most popular longhaired breeds.

Elongated and stocky, with a good muscular feel.

Skull strong, broad, and rounded; a slight flat spot just in front of each ear, and a slight flat spot on forehead in between the ears. Forehead slopes back and is slightly convex. Nose is medium in length and width, in proportion to size of the head; nose starts just below eyes and is Roman (slightly convex) in shape and profile; nostrils are set low on nose leather. Cheeks full with somewhat rounded muzzle; muzzle neither short and blunted nor pointed and narrow. Jaws heavy. Chin strong and well-developed.

Medium in length; almost as wide at the base as tall. Modified to a rounded point at tip; set as much to the side as to the top of the head.

Legs medium in length and heavy. Paws large, round, and firm; five toes in front, four behind. Paw pads: pink sometimes with dark spot(s) on paw pad(s) because of two colors in pattern.

Medium in length, in pleasing proportion to the body.

Medium long to long, silken in texture, with heavy ruff around the neck; slightly curly on stomach. Fur does not mat.

Seal point, blue point, chocolate point, and lilac point. Body color even; strong contrast between body color and points. Points of mask, ears, legs, and tail dense and clearly defined, all the same shade. Mask covers entire face including whisker pads and connects to ears by tracings. No ticking or white hair in points. Front paws have white gloves ending in even line across paw at, or between, second or third joints. Upper limit of white is metacarpal (dew) pad. Glove on back paws covers all toes; may extend higher than front gloves. Gloves extend up back of hock, called laces. Laces end in point or inverted “V” and extend ½ to ¾ of the way up hock.  Ideally, front gloves match, back gloves match, and laces match.