Police are urging dog owners to be vigilant following a rise in thefts. Police fear a rise in puppy prices during lockdown are fuelling thefts. 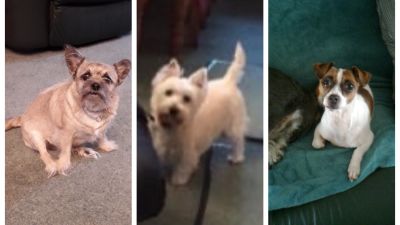 Credit: The owner of dogs stolen from Stretham in Cambridgeshire has released pictures of the animals

Police are urging dog owners to be vigilant following a rise in thefts. Police fear a rise in puppy prices during lockdown are fuelling thefts.

Police have warned dog owners to take extra security measures after 34 pets were snatched in one area - as demand for pedigree dogs has rocketed during the coronavirus lockdown.

Owners are even being advised to change their dog-walking patterns amid claims that gangs are watching popular routes.

Over recent months the country has seen dog prices significantly increase, prompting concerns around a rise in theft.

The situation has worsened during lockdown as demand for pets soars with many people working from home.

Pedigree dogs are being stolen every day from back gardens all over the country.

It is thought the figure could be much higher with victims using lost dog websites to find their pets instead of reporting the thefts to police.

Cambridgeshire Police today told families to be extra vigilant after a spate of 17 dog thefts over the past two months, worth thousands of pounds.

In nearby Suffolk, two Lhasa apso dogs and seven puppies, worth up to £2,000 each, were among pets stolen from kennels, along with six Labrador puppies and a spaniel.

Melissa Murfet, whose dogs Annie, Betsy and Storm were stolen, said her children are "in pieces" following the disgusting theft.

Nicola Scarrow said her godmother's three dogs were among the 17 taken in Cambridgeshire and offered a £350 reward each for their safe return.

Grace, a West Highland Terrier, Holly, a Jack Russell and Alice, a Chihuahua cross were snatched from a kennel in Stretham in the early hours of July 12 after thieves cut fencing to get inside.

Other dogs stolen in Cambridgeshire during lockdown include five Cocker Spaniels.

3 May - two cocker spaniels stolen from Bluntisham. They were found and returned to their rightful owners following a warrant in Willingham on 5 June.

21 May - one spaniel stolen from Newborough, Peterborough, and subsequently returned following a social media campaign by the owners.

Dog owners are advised to: