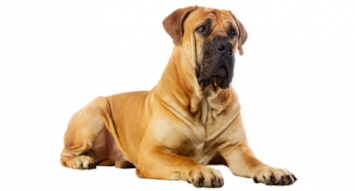 The Boerboel is a large, muscular dog showing strength and agility in motion. This dog can be strong enough to overpower and nimble enough to avoid a wide variety of dangerous African animals. This breed is also intelligent enough to recognize danger, courageous enough to face it, and cautious enough to stay clear. The jaws are particularly strong. The coat is short but dense. The skin is thick and loose for added protection. The Boerboel is well pigmented to protect against the African sun. The dog is slightly longer than tall, with powerful free-flowing movement.

When Jan van Riebeeck and company arrived in South Africa in 1652 to establish a trading post (Cape Town) for the Dutch East India Company, they brought their Bullenbijters with them for protection. Subsequent colonists also brought large protective dogs. More Bulldog and Mastiff breeds arrived with British settlers in the 1800s. These dogs all interbred and were further dispersed northward during the Great Trek beginning in 1838. They were likely also crossed with native African dogs, and the Rhodesian Ridgeback may have even played a role.

The name Boerboel (pronounced BUR-bul) means “farmer’s dog.” The boers (Dutch/Afrikaans for “farmers”) used the dogs for protection from dangerous animals and humans in the sparsely populated land, often keeping large numbers of them around the farm. During the day, the dogs would disperse to different duties—protecting farm animals, guiding oxen, or accompanying the farmer.

In 1938, the diamond mining company De Beers imported Bullmastiffs to guard their South African mines, and these dogs were subsequently integrated into the Boerboel gene pool. In the early 1980s, two individuals searched Africa for authentic Boerboel dogs, eventually locating 250 and selecting 72 for registration. The breed has since spread throughout the world. It was recognized as a member of the AKC Working group in 2015.

The Boerboel is a confident dog known for being protective of both property and people. This is a strong-willed working dog with an intelligent nature, thus, this is not a dog for a novice owner. They tend to be aloof with strangers but are extremely affectionate with those they know. The Boerboel requires proper, ongoing training and socialization from an early age to prevent over-assertiveness and other behavior issues from forming.

Boerboels need a medium level of activity. A long walk or short jogging venture will usually satisfy their exercise needs. This is not a good breed for dog parks. They enjoy challenging sports such as tracking. Coat care is minimal, consisting of an occasional bath or brushing. They do well outside in temperate climates.