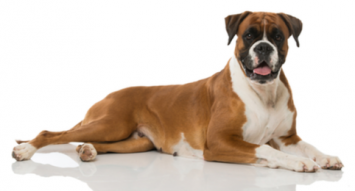 The Boxer is exemplary in the combination of stylish elegance with strength and agility. This breed is square-proportioned with good substance and musculature. The Boxer’s stride is free and ground covering, with proud carriage. The head is distinctive, with a broad, blunt muzzle and alert expression. The coat is short and shiny. This dog is perfectly suited to serve as a working watchdog.

The Boxer derives from two central European breeds of dog that no longer exist: the larger Danziger Bullenbeiser and smaller Brabenter Bullenbeiser. Bullenbeiser means bull-biter, and these dogs were used to chase large game through the forest. This required a strong but agile dog with a broad powerful jaw and a recessed nose. In England, the Bulldog was the favored breed for the sport, whereas in Germany large mastiff-type dogs were used.

Around the 1830s, German hunters began a concerted effort to create a new breed, crossing their Bullenbeisers with mastiff-type dogs for size, terriers for tenacity, and, finally, Bulldogs. The result was a tough agile dog with a streamlined body and strong grip. By 1895, an entirely new breed, the Boxer, had been established. Although the exact origin of the name Boxer is obscure, it may have been derived from the German Boxl. The Boxer was one of the first breeds to be employed as a police and military dog in Germany.

By 1900, the breed had become established as a general utility dog, family pet, and even show dog. The AKC recognized the breed soon after, but only in the 1940s did the breed begin its steady rise to the top of the popularity charts, eventually peaking as the fourth most popular breed in America.

The Boxer is playful, exuberant, inquisitive, attentive, demonstrative, devoted, and outgoing; this dog is a perfect companion for an active family. Boxers can be stubborn, but are sensitive and responsive to commands. They may be assertive toward strange dogs, but are generally good with other family dogs and pets.

The Boxer needs daily mental and physical exertion. They likes to run, but their exercise needs can also be met with a good jog or long walk on leash. They do not do well in hot weather. Some snore. The coat needs only occasional brushing to remove dead hair.