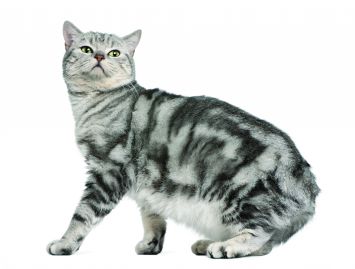 The British Shorthair is a compact, well-balanced, and powerful cat, with a short, very dense coat. They often convey an overall impression of balance and proportion in which no feature is exaggerated.

NEED FOR ATTENTION 1 out of 5

If you’re looking for a cat that will loot your refrigerator and swing dizzily from your chandeliers, then the British Shorthair is not for you. Some say the British Shorthair is the perfect household companion if you like a breed that’s undemanding, not always underfoot or in your face. British Shorthairs like to keep a low profile; they are affectionate but not clingy, playful but not overactive. They are quiet, even-tempered, and undemanding with a bit of typical British reticence, particularly when they’re first introduced.

When they get over their initial reserve, however, they become extremely faithful companions. British Shorthair need love and attention if they are to become the loyal, loving companions they can be; the more attention and affection you give them, the more they will repay you in kind. Once they get to know and trust you, British Shorthair are confident and devoted, and enjoy following you from room to room to keep an eye on your activities. They are calm, quiet companions, appreciating quality time without demanding your total attention.

One thing Brits are not, however, is lap cats. They’d much rather sit beside you, or curl up at your feet, than cuddle on your lap. British Shorthairs dislike being picked up, and tolerate it with legs stiffly stretched out to push you away. They detest being kissed, too, but head presses are acceptable, and they accept petting with great enthusiasm and mighty purrs of appreciation. They get along with other animals in the home, including dogs as long as the proper introductions are made. British Shorthairs are at their very best with children, and children love these plush smiling friends.

In many ways, the British Shorthair’s struggle for recognition resembles the American Shorthair’s in North America. Both began as working cats and weren’t appreciated as the special breeds they are for many years. The British Shorthair originated from a common street cat once called the European Shorthair. This breed, whose appearance is much different from the Brits you’ll see today, came to Great Britain some 2,000 years ago, courtesy of the Roman Empire. As they conquered and colonized other lands, the Romans brought cats along with them to protect their homes from rodents. These cats had been obtained from the Egyptians, who were very tight-pawed with their treasured felines. Eventually, however, Phoenician caravans transported them along trade routes, and Roman armies smuggled them out of Egypt and carried them along to many lands. Although the Phoenicians first introduced cats to England, the Romans were most likely responsible for their widespread establishment when Rome invaded the British Isles. Eventually, the Romans were driven from the Isles, but the cats they had brought with them remained.

The cats left behind didn’t look like today’s British Shorthair. Lithe with long, elegant bones, these cats were sandy brown or yellow-gray in color, with ticked coats like the Abyssinian and tabby markings on their face, legs, and tail. They were probably members of, or closely related to, the African wildcat, Felis silvestris lybica, the progenitor of all domestic cats. After arriving in Europe, however, they mixed with the European wildcat, Felis silvestris silvestris, a local wildcat subspecies inhabiting most of Europe. This caused a shift in both coat and body style, since the European wildcat has a broad head, small wide-set ears, a sturdy, muscular body, and short, thick fur.

Some European wildcats bear the mackerel tabby pattern; this common tabby pattern found today in so many breeds and mixed-bred cats may have arisen from the European wildcat. Because of the colder and wetter conditions, the cats in Europe developed stocky, muscular body styles and thicker, water-repelling coats that were favorable to the climate. For hundreds of years, these cats earned their livings protecting from rodents in Great Britain’s barns, granaries, alleys, gardens, and households. From these working cats, the British Shorthair developed into a stalwart, substantial breed. In the 1800s, residents started to appreciate these hardy alley cats for their beauty, strength, personality, and their value as companions.

Medium to large, well-knit, and powerful. Level back and a deep broad chest.

Round and massive. Round face with round underlying bone structure well set on short thick neck. Forehead is often rounded with slight flat plane on top of head.  Nose is medium, broad. In profile there is a gentle dip. Chin is firm, well-developed in line with nose and upper lip. Muzzle is distinctive, well-developed, with definite stop beyond large, round whisker pads.

Medium in size, broad at the base, rounded at the tips. Set far apart, fitting into rounded contour of the head.

Legs short to medium, well-boned, and strong. In proportion to the body. Forelegs are straight. Paws round and firm. Toes five in front

Medium length in proportion to the body, thicker at base, tapering slightly to a rounded tip.

Short, very dense, well bodied and firm to the touch. Not double coated or woolly.

Any other color or pattern with the exception of those showing evidence of hybridization resulting in the colors chocolate, lavender, the Himalayan pattern, or these combinations with white.