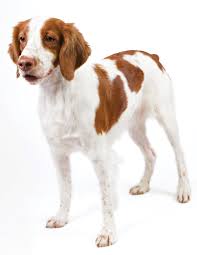 The leggiest of the Sporting breeds, the Brittany is square-proportioned, the height at the shoulder equaling the length of the body. This breed stands slightly higher at the withers than at the rump, and is medium-sized with light bone. The combination of long legs and light bones endows the Brittany with remarkable agility and speed. In fact, the breed is very quick and is noted for ground-covering side movement at the trot. The Brittany may be born tailless. The breed’s coat is far less profuse than that of spaniels and is either flat or wavy. An overly profuse coat is detrimental in briars and is considered a severe fault. The Brittany’s expression is alert and eager, but soft. The eyes are protected from briars by a fairly heavy eyebrow. The Brittany is an extremely athletic, eager dog that should be ready and able to run for extended periods.

EXERCISE REQUIREMENTS 5 out of 5

In the mid 1800s, French sportsmen crossed their small land spaniels with English Setters in attempts to produce a dog better suited for their needs. Some of the offspring were tailless, and their descendants continued to be tailless or stub-tailed. More importantly, they were excellent hunters with strong noses. These dogs soon became popular not only with the French gentry but also with poachers because they would both point and retrieve and were extremely obedient—essential qualities for the clandestine activities of the poachers.

The first Brittany (or “Epagneul Breton”) was registered in France in 1907. The Brittany came to America (Mexico) around 1925. The breed took a while to be accepted, mostly because hunters expected a pointing dog to have a long tail. When the dogs were given a chance, however, they proved their mettle and have since become the most popular of all pointing breeds at field trials. In fact, registrations eventually soared to place the Brittany among the top 20 in popularity, no doubt because of this dog’s abilities, close-ranging hunting style, small size, and tractable nature. Although registered as the Brittany Spaniel with the AKC from 1934, the word spaniel was dropped in 1982 in recognition of the dog’s hunting style, which is more like that of a setter than a spaniel.

The Brittany is quick and curious, always on the lookout for birds or fun. These dogs love to run, scout, hunt, and play. They have an independent nature, befitting any pointing breed, yet are sensitive and very responsive to human direction. Brittanys make good pets as long as they receive daily mental and physical exercise. If not given sufficient exercise, they can become destructive.

The Brittany is generally a hardy dog that requires little maintenance. This breed’s major requirement is for abundant exercise, at least an hour of exertion—not just walking—every day. The coat is not particularly thick or long, but does require brushing once or twice weekly.