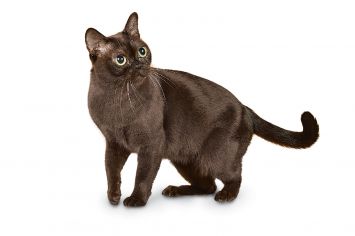 The Burmese is a cat of medium size with substantial bone structure, good muscular development, and a surprising weight for their size. This together with a rounded head, expressive eyes, and a sweet expression presents a totally distinctive cat who is comparable to no other breed.

Many say that Burmese are amusing, playful, and super-smart, the perfect interactive cats for the home —or any place people are in need of love and amusement. Devoted, loving cats, Burmese are often loyal and people-oriented. Burmese will give you unconditional love even when you are not your most loveable.

Burmese seem to never grow up; they are as entertaining at 16 weeks as they are at 16 years. These streaks of brown lightning love to perform animated antics for your amusement and theirs. Full of high-spirited playfulness, they love to entertain their families by performing daring leaps to the top of the bookcase, pausing only to make sure their audience is watching. If their antics go unnoticed, they hop right down and fix you with an unflinching stare, demanding attention. Burmese are a very determined breed, and will win just about any battle of wills.

There may be temperament differences between adult males and females. Females are intelligent, highly curious, active, and deeply emotionally involved with their human companions. Males are wholly devoted to their humans too, but are a bit more moderate in temperament. After a game of fetch or hide and seek (they hide, you seek), they like to lounge about, usually on top of what ever you’re doing. The only issue about which they are passionately concerned is the selected cuisine and how soon it will be served.

Burmese have a unique rasp to their voices and sound a bit like cats going hoarse from too much talking. However, Burmese are not as talkative as their Siamese neighbors, unless they have something important to express. Then they’ll reiterate the message repeatedly until you get out your universal feline/human translator and take care of whatever is troubling them.

The Burmese as we know and love it today can be traced back to a single female domestic cat named Wong Mau. In 1930, Wong Mau was transported into the United States from Rangoon, Burma (now Yangon, Myanmar), by Dr. Joseph Thompson of San Francisco. As the story goes, an unnamed sailor gave the feline to Dr. Thompson, who brought her home to the City by the Bay. Wong Mau was a small, fine-boned cat with a compact body, a rounded, short-muzzled head, round eyes set far apart, and a short, walnut-brown coat with darker brown on her face, ears, feet, and tail.

Dr. Thompson was very taken with Wong Mau, since she looked like cats he’d seen in Tibet. Dr. Thompson had served as a U.S. Navy doctor for some years and developed a strong interest in Southeast Asia. He spent time in a monastery in Tibet and was enchanted by the shorthaired, solid brown cats in the area. These felines, called “copper cats” in their native land for their rich brown color, have existed in Southeast Asia for centuries. They were depicted and described in the ancient text The Cat-Book Poems, a manuscript of verses and paintings written in the city of Ayutthaya, Siam, some time between 1350 c.e. when the kingdom was founded, and 1767 c.e. when the city was destroyed by invaders. As the legend goes, the Burmese is a descendant of a breed once worshipped in Burmese temples as embodiments of gods. The Cat-Book Poems also shows pictures of Siamese and what is likely Korat cats, suggesting these cats existed as separate, definable breeds for centuries.

Dr. Thompson was so taken with Wong Mau’s beauty and personality that the doctor wanted to create a program to isolate Wong Mau’s distinguishing characteristics so he could reproduce her type and color. He enlisted the help of several people, including that of anoted geneticist Dr. Clyde E. Keeler of Harvard University. Wong Mau was crossed with a sealpoint Siamese male named Tai Mau. The resulting kittens showed three different colors and patterns: beige, sable brown, and pointed. In the process, Dr. Thompson discovered that Wong Mau herself was a Siamese hybrid—half Siamese and half Burmese, what we would call a Tonkinese today. Since the pointed pattern is a recessive trait and a cat must inherit a copy of the gene from both parents to have the pattern, Wong Mau herself must have possessed the gene for the pointed pattern. Later, it was discovered that the Burmese gene responsible for the sable color is a member of the albino series of gene alleles. The Burmese gene causes solid black to appear dark sable brown by reducing the amount of pigment in the hair.

In 1936, CFA accepted the Burmese for registration, and Burmese cats were an immediate hit when they were introduced into North America in the late 1930s and early 1940s. Most cat lovers took an immediate liking to these beautiful brown cats. The results of the original program were published in the April 1943 Journal of Heredity, written by Dr. Thompson, Virginia Cobb, Billie Gerst, and Dr. Clyde E. Keeler. Unfortunately, Dr. Thompson died of a heart attack while the paper was in publication. The paper brought the Burmese more attention and fans.

The actual look of the Burmese has changed over time, achieving the diversity and current appearance through the years. Almost thirty years ago, two distinct head types emerged: the Contemporary Burmese and the European Burmese.

Medium in size, muscular in development, and presenting a compact appearance. A larger size may be seen in males. An ample, rounded chest, with back level from shoulder to tail.

Pleasingly rounded without flat planes whether viewed from the front or side. The face is full with considerable breadth between the eyes and blends gently into a broad, well-developed short muzzle that maintains the rounded contours of the head. In profile there is a visible nose break. The chin is firmly rounded, reflecting a proper bite. Their head sits on a well-developed neck.

Medium in size, set well apart, broad at the base and rounded at the tips. Tilting slightly forward, the ears contribute to an alert appearance.

Legs well-proportioned to body. Paws round. Toes five in front and four behind.