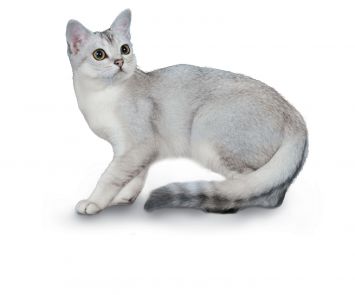 The Burmilla’s appearance is that of an elegant cat of foreign type and medium size.

FRIENDLINESS TO CHILDREN 5 out of 5

The Burmilla’s temperament gives you the best of both its parent breeds—the personality of the active, mischievous, demanding Burmese is tempered by the tranquil, easy-going, affectionate Chinchilla Persian. Some have raved about the Burmilla’s unique and captivating personality. Adventurous and bold as kittens, Burmillas grow into sweet-natured, people-oriented adults. Not as active as the Burmese, Burmillas are still are full of life and enjoy a good game of catnip toy wrangling. Their favorite games, however, are those they share with their human companions. Whirling feathers, laser light toys, round toys to fetch again and again—these throw the Burmilla into an ecstasy of delight. A ball of scrap paper will serve just as well, provided you’re there to share the fun.

Like the Burmese, they are also very curious and intelligent; whatever you have hidden in that closed room or closet is cause for a full investigation by the inquisitive Burmilla. This determined breed will figure out a way into that closed door or cupboard, particularly if they notice you’d rather they didn’t. Anything left out in the open is fair game, too; don’t expect keys, socks, glass cases, pens, or the contents of your purse to remain where you put them. Small movable items immediately become toys. Watch out: you may catch your Burmilla tapping out texts to their Burmilla buddies.

After a good romp, your loyal and loving Burmilla will want to cuddle into your lap or arms, or curl up beside you on the couch for some petting, purring, and catnapping. Not overly vocal, Burmillas do have a loud, deep-throated purr that they switch on the moment you slide your hand down their silky backs. In all, it’s the Burmilla’s intelligent, affectionate, enthralling personality that wins the breed’s many fans.

The Burmilla cat breed originated in England in the early 1980s, by an accidental crossing between a silver Chinchilla male named Jemari Sanquist and a platinum European Burmese female named Bambino Lilac Fabergé.

Englishwoman, Miranda Bickford-Smith had acquired Sanquist as a pet for her husband. However, shortly before Sanquist was to be neutered he had crossed with a Burmese female. Soon after, it was clear that Burmese Bambino would have a litter fathered by Chinchilla Sanquist.  Bambino gave birth on September 11, 1981 to four Chinchilla/Burmese hybrids, all shorthaired shaded silver females. Bickford-Smith named the kittens Galatea, Gemma, Gabriela, and Gisella, and in a few weeks so was impressed with their attractive foreign type and short dense coats that she called friend a Therese Clarke, to give her opinion of the cats. Clarke shared Bickford-Smith’s excitement about the appearance and temperament of the hybrids, and they teamed up to develop them as the foundation of a new breed.

Clarke was particularly impressed with Galatea and Gemma from that first litter, so she kept Gemma to establish the beginnings of the Burmilla lines while Bickford-Smith kept Galatea to do the same. A crossing between the longhaired Chinchilla Persian and the shorthaired Burmese will always produce shorthaired offspring, because one copy of the recessive gene for long hair must be inherited from each parent for long hair to appear in a kitten’s physical appearance. Therefore, Gemma and Galatea were both shorthaired, but both also carried the recessive gene for long hair from their Chinchilla father, and the recessive solid or ‘self’ gene from their Burmese mother. Both also had appealing foreign body and head types, and Clarke and Bickford-Smith decided that the new breed should resemble Gemma and Galatea, yet be different enough not to be taken for any existing breed.

They then came up with a name for their new breed. With a bit of thought they came up with the Burmilla (“Burm” for the Burmese, and “illa” for the Chinchilla); and thought Burmilla had a nice ring to it. In 1983 Miranda Bickford-Smith became interested in the different varieties that were being produced during the breed’s development, while Clarke was focusing on the original shorthaired Burmilla blueprint. Therefore, they agreed to expand their efforts and would develop the breed in two different ways: Bickford-Smith would develop the Burmilla and its additional colors and hair lengths, and Clarke would focus on the type of Burmilla seen in the foundation cat Gemma. In 1984, Bickford-Smith and Clarke formed the Burmilla Cat Club to promote their new breeds.

In 1995, the breed crossed the Atlantic and was introduced to North America. The Burmilla Enthusiasts of America was formed to promote and advance the breed. Now recognized by five associations, the breed is catching on with Americans. Today the Burmilla is seen in both long and short hair lengths.

Medium length and size. Rounded chest of medium width. Back straight from shoulder to the rump.

Gently rounded top of head with medium width between the ears; wide at eyebrow level and jaw hinge, tapering to a short, blunt wedge. Profile shows a gentle dip. Tip of nose and chin should be in line. Chin is firm with good depth.

Medium to large, broad at base with slightly rounded tips; set with slight forward tilt in profile. Viewed from front, outer line of ear continues that of face.

Medium to long with medium thickness at base; tapering to a slightly rounded tip.

Fine and silky coat medium long, except over the shoulders, without a woolly undercoat. Ear tufts, furnishings, and full tail plume.

Short with a silky texture; smooth lying with sufficient undercoat to give
a slight lift.