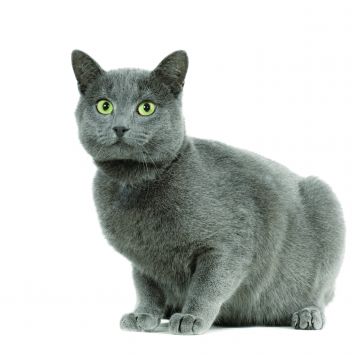 The Chartreux is a sturdy, shorthaired French breed coveted in antiquity for its hunting prowess and its dense, water repellent fur. This breed’s husky, robust type is sometimes termed primitive, neither cobby nor classic. Though amply built, Chartreux are extremely supple and agile cats; refined, never coarse nor clumsy.

Chartreux cats may have been invited in by monks to protect the monastery from rodents . Today, however, Chartreux cats are popular because they make terrific companions. Who can resist a cat that greets you with a mighty purr and an enigmatic smile? They are amiable, loyal, loving, and adaptable, and when you sit down next to your Chartreux, you invariably end up with an exquisitely soft lapful of adoring blue feline. Chartreux are the strong silent types of the cat fancy; they keep their comments to themselves, even when standing beside empty food dishes. Chartreux may open their mouths as if to meow, but no sound comes out. When they do vocalize, it’s usually with small chirps or trills—it’s amazing to hear tiny chirps come out of those large, powerful bodies and strong jaws. They do purr with the greatest enthusiasm, however, particularly when you’re serving up their favorite snack. In addition, quality time with their preferred persons always make them smile. Nevertheless, Chartreux cats have a quiet but well-developed sense of humor, and enjoy a good joke, particularly if it’s at your expense. Known for their hunting prowess and their strong hunting instinct, they love toys that move, preferably by human power. Feathered toys that whirl through the air are particular favorites. They easily learn to play fetch and enjoy frolicking with other felines and sometimes even an agreeable dog—and their human friends, of course. They are very intelligent cats; they quickly learn their names and if you like a good challenge you can even teach them to come when you call—if they’re in the mood, of course. This cat is the perfect feline friend; in return for a bowl of food, a clean litterbox, and a soft bed (yours) to sleep on, you get a constant companion that entertains, loves, and cheers you up with its angelic smile and sweet devotion.

The Chartreux (pronounced shär-TRUE), a true blue cat with a Mona Lisa smile and an amiable temperament, is France’s contribution to the cat fancy. Since the Chartreux has been around for so many centuries, it’s hard to say with certainty just where and when it first developed. Like most breeds with long histories, the Chartreux tale is the stuff of legends. The most popular account tells that the Chartreux was bred by monks at the Grande Chartreuse Monastery, the chief monastery of the Carthusian order, located north of Grenoble in southeastern France. As the story goes, the Carthusian order of monks at the monastery, in their spare time between praying, liqueur-making, and weapon-forging, bred Chartreux cats with the same skill and dedication with which they created their world-famous yellow and green Chartreuse liqueurs. Allegedly, they selectively bred the cats to have quiet voices so as not to disturb the monks’ meditations. It’s a lovely, romantic tale, but a tale is likely all it is, since the monastery’s records do not mention cats, blue or any other color. A mention of the Chartreux breed, however, is found in the 1749 36-volume Histoire Naturelle (Natural History) by French biologist Comte de Buffon, who lists four cat breeds common in Europe at that time: Domestic, Angora, Spanish, and Chartreux. According to Jean Simonnet’s definitive 1980 book The Chartreux Cat, the Chartreux probably came from the Near East, and the cat described as the Cat of Syria by the Italian naturalist Ulisse Aldrovandi (1522–1605), was likely its ancestor. In Jean Simonnet’s book, an illustration of the Cat of Syria shows a stocky cat with solid blue coloring and vivid, slightly almond-shaped copper colored eyes. Beside the cat, a brown mouse cowers, a testament to the Chartreux’s strong hunting instincts, and one of the reasons the breed was so highly prized. Brought to Europe from the Near East countries in merchant ships, the Chartreux became established as a French breed. That the Chartreux survived at all is a testament to the breed’s endurance and flexibility, since for many centuries members of the breed weren’t treated with the kindness and love they’ve earned today. Primarily street cats, they were prized for their rat-catching prowess and, for a time, for their luxurious pelts. As Jean Simonnet notes, “One can truly say that the Chartreux cats beloved to us formerly did not have the ‘best of times’ with our countrymen.” The modern history of the breed began in the 1920s when two sisters, Christine and Suzanne Leger, discovered a colony of plush, shorthaired blue cats in the city of Le Palais on Belle Ile Island off the coast of Brittany in northwest of France. These free-roaming cats lived on the grounds of a hospital and matched the description of the Chartreux. (The hospital was run, coincidentally, by a religious order.) The people of Le Palais called them “hospital cats,” and the Leger sisters were taken with their beauty and thick blue coats. Christine and Suzanne Leger were the first to work seriously with the breed, and in 1931 they exhibited the cats in Paris. The breed became popular, but  World War II intervened, decimating the country and the breed. After the war, the few remaining Chartreux were bred with blue British Shorthairs, Russian Blues, and Persians, to keep the bloodlines going. Today, du chat des Chartreux (The Chartreux Cat Club) works to preserve, promote, and protect the Chartreux. The Chartreux made its journey to the United States in 1970, when the late Helen Gamon of La Jolla, California, imported the first Chartreux from France. The breed achieved CFA championship status in 1987; today, all North American associations accept the Chartreux as a breed in its own right.

The Chartreux has a robust physique, with medium-long with broad shoulders and a deep chest. This breed has strong boning and muscle mass is solid and dense.

The Chartreux has a rounded and broad head with a powerful jaw and full cheeks. The breed has a high, softly contoured forehead and a straight nose of medium length/width with a slight stop at eye level. The muzzle is comparatively small, narrow. This cat has a sweet, smiling expression.

Medium in height and width; set high on the head; very erect posture.

Rounded and open; alert and expressive. Color range is copper to gold; a clear, deep, brilliant orange is preferred.

Legs comparatively short and fine-boned; straight and sturdy. Feet are round and medium in size; may appear almost dainty compared to body mass.

Tail of moderate length; heavy at base; tapering to oval tip. Lively and flexible.

Any shade of blue-gray from ash to slate; tips lightly brushed with silver. Emphasis on color clarity and uniformity rather than shade. Preferred tone is a bright, unblemished blue with an overall iridescent sheen.