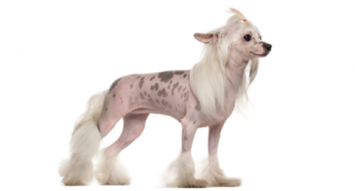 The Chinese Crested is fine boned and slender, among the most elegant and graceful of breeds. In the Hairless variety, soft silky hair is found only on the head (crest), tail (plume), and feet and lower legs. The skin of the hairless areas is smooth and soft. In the Powderpuff the entire dog is covered with soft silky coat of moderate density and length.

The origins of the Chinese Crested are difficult to trace. Hairless dogs seem to arise by mutation all over the world, but they have been principally perpetuated in Central and South America. The Chinese Crested is the exception, apparently arising in Africa and brought to China as early as the thirteenth century. Chinese seafarers are said to have kept the dogs on ship as curios and to trade them with local merchants wherever they called. Thus, the breed was distributed to Turkey, Egypt, South Africa, and possibly Central and South America.

Only in the 1800s were they recorded in Europe, with paintings and later, photographs, including dogs of Chinese Crested type. In the late 1800s, the breed found a proponent in the American Ida Garrett, who popularized several types of hairless dogs. With the help of a handful of committed breeders (including the famed Gypsy Rose Lee), the Chinese Crested gradually gained admirers in both America and Europe. In 1991—after a century of effort—the breed was recognized by the AKC.

The Chinese Crested is a combination of playful pixie, gentle lapdog, and sensitive companion. He is devoted to his family and willing to please; he is also good with other dogs, pets, and strangers. His demeanor should be gay and alert.

The Crested enjoys a romp outside, but he hates the cold. He is small enough that he can get sufficient exercise with vigorous inside games. Hairless varieties will need a sweater for cold weather outings. This is not a breed for outdoor living. Powderpuff coat care entails brushing every day or two. The muzzle is usually shaved every two weeks in Puffs. The Hairless needs regular skin care such as application of moisturizer, sun block, or bathing to combat blackheads.