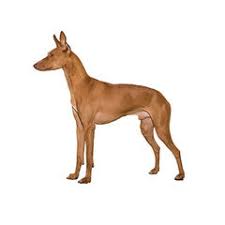 The Cirneco is a medium-sized breed that was bred to hunt by scent, hearing, and sight. They have an elegant, strong build, lightly constructed with long limbs and a square outline. The coat is short and sleek. In personality they are strong, lively and independent; always alert.

The Cirneco dell’Etna (pronounced ‘cheer-NAY-co’) traces back as much as 2,500 years ago on the island of Sicily, particularly in the area surrounding Mount Etna. The dogs hunted rabbits by scent and, to a lesser extinct, sight.

The Cirneco resembles a small Pharaoh Hound, and the two breeds are undoubtedly related. It’s believed the Cirneco descends from the prick-eared, houndtype dogs of ancient Egypt that were spread by the seafaring Phoenicians. It’s possible the dogs became smaller over time because of limited food and no need for big hunters in the area, which lacked open spaces.

Dogs resembling Cirnechi (plural form) are depicted on 5th to 3rd century b.c. coins from Segesta in Sicily. Legend has it that a thousand Cirnechi guarded an ancient temple dedicated to Adranos (fire god), and that the dogs could divinely discern—and attack— thieves and nonbelievers while guiding pilgrims to the temple. The breed was virtually unknown outside Sicily until 1932, when a visiting veterinarian published an article in an Italian hunting journal that outlined their poor outlook. The Baroness Agata Paternó Castello headed a group to revive the breed and worked diligently to do so until her death.

In 1939, the Italian Kennel Club adopted a standard and recognized the breed. They came to America in 1996 and attracted more attention when they began lure coursing competitively in the late 1990s. In 2015, they were admitted into the AKC Hound Group where they are considered sighthounds.

The Cirneco is very affectionate, lively, and gentle. Although sighthound and primitive breeds are known for their independence, they are far less so than most. They are typically friendly to strangers and get along well with kids, other dogs, and pets. They do like to hunt and can be led away by rabbit trails or fleeing wildlife. They tend to be a busy dog, always involved in some sort of project! In keeping with their hunting heritage, they are seldom deterred by obstacles in the way of anything they want.

The Cirneco is a family dog that should live indoors with their people. The Cirneco is very clean and enjoys creature comforts—they like warmth and dislike cold. They need a moderate jaunt around the neighborhood or a lively backyard game daily. They are not natural retrievers or swimmers but may be taught to do both. Coat care entails a quick weekly brushing.