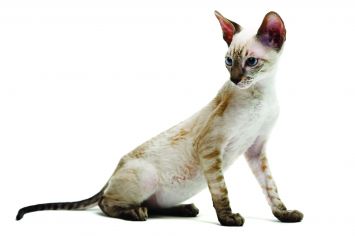 The Cornish Rex is distinguished from all other breeds by its extremely soft, wavy coat and racy type. The cat is surprisingly heavy and warm to the touch. All contours of the Cornish Rex are gently curved.

Cornish Rexes are good for people who like having their lives run by active, inquisitive, gazelle-like felines that love a good joke, as long as it’s not on them. Everything is a game to the Cornish Rex, and they can be hard to ignore when they’re in a sociable mood, which is most of the time. Rexes are determinedly outgoing with their favorite humans. With their warm suede feel, they make the perfect winter lap warmer, too. They are intelligent, alert, and usually easy to handle. Dinner will never be the same again with a purring Cornish stealing your food as soon as your back is turned, or even while you’re looking. Some Rexes enjoy retrieving and will bring back objects for you to toss again and again. They are adept climbers, leapers, and sprinters, and have marvelously agile paws. No shelf or cupboard is safe from a persistent Cornish.

The first known Cornish Rex was born on July 21, 1950, on a farm in Bodmin Moor, Cornwall, England, when a tortoiseshell and white random-bred cat named Serena gave birth to five kittens. The litter contained one curly-coated orange and white male kitten, which Nina Ennismore, Serena’s owner, named Kallibunker. Kallibunker was noticeably different from his littermates. His hair was short and curly and, instead of possessing the cobby body like that of his littermates and mother, Kallibunker’s body was long and lithe. He had large ears, a slender tail, and a foreign wedge-shaped head. Interested in this mini-mutant mouser, Ennismore recognized that Kallibunker’s fur was similar to the wavy fur of the Astrex rabbit, since Ennismore had previously raised and exhibited rabbits. She got in touch with British geneticist A. C. Jude, who agreed that the fur of Kallibunker was similar to the Astrex rabbit’s fur. On the advice of Jude, Ennismore backcrossed Kallibunker to his mother. This mating produced a litter containing one straight-coated kitten and two curly-coated kittens. A second mating was arranged for Kallibunker and his mom, and again curly-coated kittens were produced. The name Cornish Rex was decided upon for the new breed because of the breed’s Cornish origin and the resemblance to the Astrex rabbit.  Two Cornish Rexes arrived in North America in 1957, courtesy of fancier Fran Blancheri. The CFA accepted the Cornish for championship in 1964; all the North American registries now accept the Cornish Rex. The Governing Council of the Cat Fancy (GCCF) and the Fédération Internationale Féline (FIFe) in Europe also accept the Cornish Rex.

Small to medium in size; never coarse. Torso long and slender, not tubular, showing a deep, but not broad chest. Outline is comprised of graceful arches and curves without any sign of flatness. The back is naturally arched and evident when the cat is standing naturally. The underline gently curves upward from the ribcage to form waistline (tucked up in appearance). Hips and thighs muscular and feel somewhat heavy in proportion to the rest of body.

Comparatively small and egg shaped. Length about one third greater than the width. A definite whisker break, oval with gently curving outline in front and in profile. Muzzle narrowing slightly to a rounded end. Nose Roman. In profile a straight line from end of nose to chin with considerable depth and squarish effect. Cheek bones high and prominent, well chiseled. Chin strong, well-developed.

Large and full from the base, erect and alert; set high on the head.

Medium to large in size, oval in shape, and slanting slightly upward. A full eye’s width apart. Color should be clear, intense, and appropriate to coat color.

Legs very long and slender. Thighs well-muscled, somewhat heavy in proportion to the rest of the body. The Cornish Rex stands high on its legs. Paws dainty, slightly oval. Toes five in front and four behind.

Long and slender, tapering toward the end and extremely flexible.

Short, extremely soft, silky, and completely free of guard hairs. Relatively dense. A tight, uniform marcel wave, lying close to the body and extending from the top of the head across the back, sides, and hips continuing to the tip of the tail. Size and depth of wave may vary. The fur on the underside of the chin and on chest and abdomen is short and noticeably wavy.