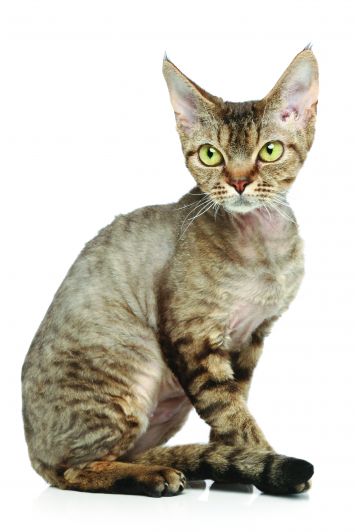 The Devon Rex is a breed of unique appearance. The breed’s large eyes, short muzzle, prominent cheekbones, and huge, lowset ears create a characteristic elfin look. A cat of medium fine frame, the Devon is well covered with soft, wavy fur. The fur is of a distinctive texture, as the mutation that causes its wavy coat is cultivated in no other breed.

Devons have been compared to pixies, elves, and, of course, space aliens for their jumbo-sized satellite-dish ears, large, mischievous “window-to-the-soul” eyes, and ethereal appearance. People laud the playful “poodle cat,” as the breed is affectionately called, as people-oriented snugglers that love nothing better than to cuddle up with you at night and wake you in the morning with hugs, kisses, and purrs of affection. Moreover, since the Devon sheds less than other breeds, you can snuggle back without fear of covering yourself in as much cat hair. However, there are many other reasons to acquire a Devon besides their curly coats. Their loyalty, devotion, playfulness, courage, and intelligence set them apart from other breeds, just to name a few of the qualities that make them a good choice for the cat-obsessed. Devons are shoulder perchers, lap sitters, tail waggers, and retrievers of tossed cat toys. They have a well-developed sense of curiosity and want to be involved in whatever you’re doing, whether it’s peeling potatoes for dinner or taking a quick dip in the shower. Your Devon will hop into the bathtub before it’s dry, just to see what you were up to; a bit of water can’t dampen your Devon’s curiosity, or its thirst to constantly be by your side.

The Devon Rex can be traced back to a single cat in 1960. The father of the Devon breed, a feral, curly-coated tom, lived around an abandoned tin mine near Buckfastleigh, a small town in the county of Devon in southwest England, which borders Cornwall, the birthplace of the Cornish Rex. The curly-coated tom mated with a straight-coated calico female, producing a litter of kittens in the garden of cat lover Beryl Cox. One of the kittens, a brownish-black male that Cox named Kirlee, had the same short, curly coat as his father. At first, Beryl Cox thought Kirlee was a Cornish Rex, since the Cornish’s birthplace was not far away from her county of Devon. Subsequent matings between Kirlee and the cats of Cornish Rex breeder Brian Stirling-Webb resulted in only straight-coated offspring, from which Cox and Webb concluded that the two breeds were unrelated. It is now thought that Kirlee’s calico mother and the curly-coated feral male that was her father must have been related, since the Devon Rex gene that governs the curly coat is recessive and must be inherited from both parents to manifest in offspring. Kirlee must have inherited one copy of the gene from each of her parents. The name Devon Rex was adopted. The first Devon was imported to the United States in 1968. In 1972, ACFA became the first U.S. association to accept the Devon for championship. The Devon was accepted by TICA in 1979 (the year TICA was formed). The CFA accepted the Devon for championship in 1983. Today all North American cat associations accept the Devon for championship. In addition, the Devon is accepted for championship in Europe by The Governing Council of the Cat Fancy (GCCF) and the Fédération Internationale Féline (FIFe).

Hard and muscular, lithe, and of medium length. Broad in chest and medium fine in boning, with medium fine but sturdy legs. Carried high on the legs with the hind legs somewhat longer than the front. Allowance to be made for larger size in males, as long as good proportions are maintained.

Modified wedge. In the front view, the wedge is delineated by a narrowing series of three distinct convex curves: outer edge of ear lobes, cheekbones, and whisker pads. Head to be broad but slightly longer than it is broad. Face to be full-cheeked with pronounced cheekbones and a whisker break. In profile, nose with a strongly marked stop; forehead curving back to a flat skull. Muzzle is short, well-developed. Prominent whisker pads. Chin strong, well-developed. In profile, chin shall line up vertically with nose, being neither undershot nor overshot.

Strikingly large and set very low, very wide at the base, so that the outside base of ear extends beyond the line of the wedge. Tapering to rounded tops and well covered with fine fur. With or without earmuffs and/or ear-tip tufts.

Legs long and slim. Paws small and oval, with five toes in front and four behind.

Cat is well covered with fur, with greatest density occurring on the back, sides, tail, legs, face, and ears. Slightly less density is permitted on the top of head, neck, chest, and abdomen. Bare patches are a fault in kittens and a serious fault in adults. Coat is soft, fine, full-bodied, and rexed. Coat is short on back, sides, upper legs, and tail. It is very short on the head, ears, neck, paws, chest, and abdomen. A rippled wave effect should be apparent when the coat is smoothed with one’s hand. The wave is most evident where the coat is the longest, on body and tail.