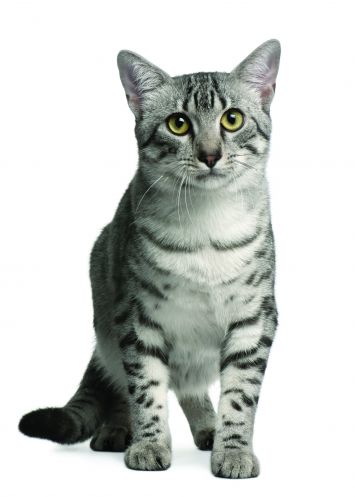 The Egyptian Mau is the only natural domesticated breed of spotted cat. The Egyptian’s impression should be one of an active, colorful cat of medium size with well-developed muscles.

While some people might at first be attracted to the Egyptian Mau’s beautiful spotted coat, most become fans due to the breed’s temperament and personality. Maus, like their ancestors that were invited along on the duck hunts of their Egyptian companions, love to fetch. In fact, they love any play activity that mimics hunting behavior. Indoor-only Maus, the only kind recommended by most enthusiasts, will sometimes leave gifts of well-killed catnip mice on the pillows of their favorite people. Be sure to give your Mau lots of pettings and praise, and perhaps a treat or two, for these presents; Maus will be upset, and quite confused, if their generous gifts are coldly rejected. While not overly talkative, Maus will let their humans know if something is amiss, particularly if that something concerns food dishes. Their voices are usually melodious and quiet. When engaged in conversation with their human companions, Maus wag their tails, tread with their feet, and make a variety of sounds that fanciers call “chortling.” Maus are devoted to the humans who pay them the proper homage. If you show your Mau you can be trusted, your Mau will shower you with love and loyalty. They are fiercely loyal cats who generally don’t take to strangers. Once they bond with their preferred persons, they want to be worshipped by their chosen family rather than by the entire human race.

The ancient Egyptians are the first people to leave extensive evidence of their alliance with domestic cats—an affiliation that developed at least 5,000 years ago, according to Egyptian writings, statues, and bas-reliefs. Presumably, cats were first welcomed for their ability to keep rodents away from stores of grain and thus prevent famine, and for their ability to kill snakes. However, later Egyptian domestic cats became beloved household companions, and then sacred animals associated with the gods. Evidence in the form of depictions, paintings, and sculptures shows that spotted cats existed during the time of the Egyptian cat cult, and some believe that the predecessor of the Mau was the same cat worshipped by the ancient Egyptians. A papyrus painting dating around 1100 b.c.e. shows Ra in the form of a spotted cat beheading the evil serpent Apep. In 1580 b.c.e., a papyrus record quotes a spotted cat as saying, “I am the cat which fought near the Persea Tree in Annu on the night when the foes of Neb-er-tcher were destroyed!” In addition, a 1400 b.c.e. tomb painting found in Thebes depicts a spotted cat retrieving a duck for an Egyptian hunter, showing that cats were not only worshipped but played an important role in everyday life as well. If, as some fanciers believe, the Egyptian Mau is a living artifact of that ancient era, then the Mau is one of the oldest breeds of domestic cat. Characteristics common to modern Maus can be seen in papyrus paintings, right down to the random spots. However, that’s not proof of anything except that spotted cats lived in ancient Egypt. Egyptian Maus joined the European cat fancy in the early 1900s. Fanciers in Italy, Switzerland, and France worked to develop the breed; however, as it did many pedigreed breeds, World War II decimated the Egyptian Mau population, and by the mid-1940s the Mau was almost extinct. The efforts of thea exiled Russian Princess Nathalie Troubetskoy brought the Mau back from the brink of extinction. While in Italy, she rescued some of the few remaining specimens. She was also instrumental in importing at least one Mau from Egypt via the Syrian Embassy. In 1956, Troubetskoy immigrated to the United States, bringing with her three Maus bred from her original stock. Upon arrival, Troubetskoy established the Fatima Egyptian Mau Cattery, and began to promote the breed. The Mau soon collected a following who wanted to preserve the rare, beautiful, historically significant breed. Because of the small gene pool and because additional Maus were almost impossible to obtain from Egypt, a certain amount of inbreeding and out-crossing were required to continue the breed in North America. Selective breeding for temperament was also a priority, since disposition problems were noted in some bloodlines. In the 1980s and 1990’s additional Maus were brought into the United States. This widening of the gene pool was vital to the breed’s health and well-being. In 1968, CFF was the first to accept the Egyptian Mau for championship status. CCA soon followed, and the CFA granted championship in 1977. Today, all major associations accept the Mau.

Medium long and graceful, showing well developed muscular strength. Loose skin flap extending from flank to hind leg knee. General balance is more to be desired than size alone. Allowance to be made for muscular necks and shoulders in adult males.

Slightly rounded wedge without flat planes, medium in length. Not full-cheeked. Profile showing a gentle contour with slight rise from the bridge of the nose to the forehead. Entire length of nose even in width when viewed from the front.

Medium to large, alert and moderately pointed, continuing the planes of the head. Broad at base. Slightly flared with ample width between the ears. Hair on ears short and close lying. Inner ear a delicate, almost transparent, shell pink. May be tufted.

Large and alert, almond shaped, with a slight slant towards the ears. Skull apertures neither round nor oriental. Eye color gooseberry green. Allowance is made for changing eye color, with some discernible green by eight months of age and full green eye color by one and one half years of age. Preference given at all ages for greener eyes.

Legs and feet in proportion to body. Hind legs proportionately longer, giving the appearance of being on tip-toe when standing upright. Feet small and dainty, slightly oval, almost round in shape. Toes five in front and four behind.

Medium long, thick at base, with slight taper.

Medium in length with a lustrous sheen. In the smoke color the hair is silky and fine in texture. In the silver and bronze colors, the hair is dense and resilient in texture and accommodates two or more bands of ticking separated by lighter bands.