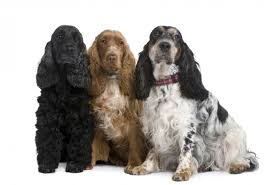 The English Cocker was bred to find, flush, and retrieve upland game birds during a full day of hunting. The dog is slightly taller than long, compactly built, and short coupled. The English Cocker has a driving, powerful gait that covers ground effortlessly. The coat is of medium length, silky in texture, and either flat or slightly wavy. The feathering should not be so profuse that it becomes a hindrance in the field, but it should be long enough to protect the underside of the dog. The expression is soft and melting, yet dignified.

The spaniel family is one of the largest groups of dogs, and one of the most specialized. The English Cocker Spaniel is one of the land spaniels. The land spaniels consisted of larger spaniels that were better for springing game, and smaller spaniels that were better for hunting woodcock. These different sizes appeared in the same litters and were essentially two variations of the same breed. Only in 1892 were the two sizes considered separate breeds, with the smaller size (under 25 lb) designated as the Cocker Spaniel. In fact, because both breeds shared the same gene pool, they still share many of the same hunting talents.

After the breeds were separated, the American Cocker eclipsed the English in popularity—but only in America. Throughout the rest of the world, the English Cocker is by far the more popular of the two breeds and is known simply as the Cocker Spaniel. It is one of the most successful show dogs and popular pets of all breeds in Great Britain.

The English Cocker Spaniel retains more of his hunting nature than does the American version, and he also needs a little more exercise. He is cheerful, inquisitive, demonstrative, devoted, biddable, loyal, and sensitive. This is a sociable dog that likes to stay close to his human family.

Daily exercise is a necessity, either in the form of a long walk on leash, a good run in the field, or a lively game in the yard. The medium-length coat needs brushing two to three times per week, plus clipping around the head and ears and scissoring around the feet and tail every two months. The ears should be cleaned weekly.