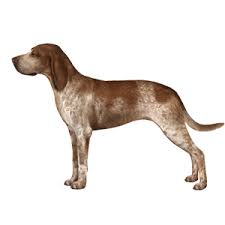 The American English Coonhound combines speed with endurance, and as such has a moderate build with a strong but racy body. It is almost square proportioned, being just slightly longer than tall. The coat is hard, which provides protection from heavy brush and harsh elements. The muzzle is fairly broad, providing plenty of room for olfactory organs. Flews and hanging ears may help sweep and trap odor molecules. The trot is effortless, with good reach and drive, giving the impression of great endurance. The voice is a strong loud bawl that can be heard from great distances.

In colors of red, white, and blue, the American English Coonhound is as all-American as you can get–except, of course, for the English part. Created from English hunting hounds brought to America during the seventeenth and eighteenth centuries, the breed’s first American incarnation was known as the Virginia Hound. Selective breeding created a dog better suited to the tangled terrain of the southeastern United States and for hunting a variety of mammals including fox, raccoon, and sometimes, opossum, boar, and cougar. In 1905, the UKC recognized the breed as the English Fox and Coonhound. The name was eventually shortened to English Coonhound, which is still its name with the UKC. When the AKC recognized them in 2011 they took the name from the parent club, the American English Coonhound Association. Nobody objected to the Americanization, because by that time they were true American citizens. To add to the confusion, many people call them Redtick Coonhounds, because most have the red ticked pattern—although they also come in other combinations of red, blue, and white. The Bluetick and Treeing Walker Coonhounds were initially part of the same breed until the mid-1940s. Although most American English are red ticked, some are still tri-colored or blue ticked like their Bluetick and Walker relatives. The breed embodies the American work—and play—ethic. Its primary role has always been that of a first-rate hunting hound. Known for its speed, endurance, and melodious voice, top hunters command top dollar.

Cheerful, alert, affectionate, strong-willed, fun-loving, and mischievous, they enjoy outwitting owners by sniffing out trouble. Hunting is their first love. They are independent and apt to follow their nose in pursuit of a scent trail. They tend to be laid-back at home, eager to earn a treat, and reluctant to challenge authority but are easily distracted by scents when training. They enjoy the company of other dogs and get along well with everyone, even small animals if they’re raised with them. They are adequate watchdogs.

Although fairly quiet inside, this is a dog that lives for the outdoors. It needs to take in new smells and have the chance to investigate scents every day. A good daily jog will satisfy its exercise requirements. Inside, food must be kept well out of reach. Coat care consists of occasional brushing. Their loud bay is freely given.