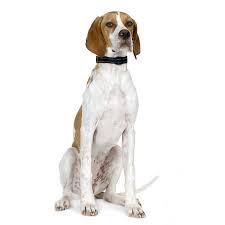 The Pointer combines athletic grace and power with a lean, muscular body, noble head, alert expression, and noble carriage. The gait is smooth and powerful, with head held high and nostrils wide, enabling them to cover a lot of ground while searching for airborne scent. The tail lashes from side to side when the dog gaits. The Pointer’s close coat is short and dense, giving a clean streamlined appearance. Field type pointers tend to hold their tails upright when on point.

The earliest Pointers were used in the seventeenth century not to point birds, but to point hare, which coursing Greyhounds were then unleashed to pursue. When wing-shooting became popular in the eighteenth century, the Pointer found their place as an adept bird locator. The ideal dog would find game, indicate its location, and remain still until the hunter could get ready to shoot—a task that was somewhat slow with the old flintlock guns.

The early Pointer probably included in its genetic makeup some of the most talented breeds in existence: Greyhounds, Foxhounds, and Bloodhounds, as well as an old type of setting spaniel. Different countries developed different Pointer breeds. After the war of Spanish Succession (1713), British army officers returned home with heavy boned Spanish Pointers. These were later crossed with Italian Pointers to produce the modern Pointer. Pointers became popular for recreational hunting on large estates. Ideally, two Pointers were used so that the hunter could locate the bird precisely by cross-referencing the dogs’ points. When dog shows came in vogue in the late nineteenth century, Pointers were among the most prominent of the breeds shown; in fact, the Westminster Kennel Club was organized primarily for Pointers.

The Pointer needs lots of exercise or it can become frustrated and destructive. Because they are ever on the lookout for birds, they are easily distracted from everyday matters—but they are nearly impossible to distract once on point. They are gentle and sweet but may be too energetic and boisterous at times for very small children.

The Pointer needs exercise, and lots of it. They need at least an hour of exertion every day. They enjoy running and hiking. At home they need space to exercise outdoors and should not be expected to sit inside all day. They require only an occasional brushing to remove dead hair.