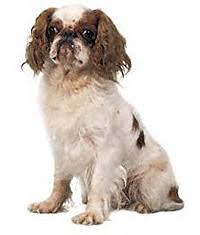 The English Toy Spaniel is profusely coated with a silky, flowing coat. The coat can be straight or slightly wavy. It has heavy fringing, including feathering on the feet. The hallmark of the breed, however, is their head and expression. The head should be domed, with lustrous dark eyes and well-cushioned face, creating a soft appealing expression.

AFFECTION LEVEL 2 out of 5

The English Toy Spaniel and the Cavalier King Charles Spaniel share identical early histories. They began as one breed, probably resulting from crosses of small spaniels with Oriental toy breeds. Some evidence supports the theory that Mary, Queen of Scots, brought the first toy spaniels to Scotland with her from France. These “comforter spaniels” became very popular with the wealthy classes, and served as foot and lap warmers as well as delightful companions. They reached their height of early popularity during the seventeenth century reign of King Charles II, who so doted on his dogs that the breed was soon being called King Charles Spaniels—the name by which the breed is still known in England.

These early dogs were all black and tan; other colors were developed later, with the first Duke of Marlborough credited with developing the red and white “Blenheims,” named after his estate. The red and white coloration may have come from crosses with Chinese Cocker Spaniels. The duke’s spaniels were said to be good hunting dogs for woodcock. Most proponents of the breed were more interested in having an eye-catching lapdog than a hunting dog, and in the ensuing centuries the King Charles Spaniel was bred down in size and selected for a rounder head and flatter nose. In America, the name was changed to English Toy Spaniel and is shown as two varieties: the red particolored Blenheim and black and tan particolored Prince Charles, and the red solid-colored Ruby and black and tan solid-colored King Charles. Sometimes called “E.T.s” or “Charlies,” the breed has continued to find favor with owners desiring an aristocratic but fun-loving lapdog.

The English Toy Spaniel enjoys rollicking romps. He is a lapdog par excellence, gentle, amiable, calm, and quiet, yet he is playful and attentive. He is devoted to his family and reserved with strangers. He may be somewhat stubborn.

Although he enjoys a nice walk on leash or a fun game in the house or yard, the English Toy Spaniel is not overly active and his exercise needs can be met with minimal effort. He does not do well in heat. His long coat needs combing twice weekly.