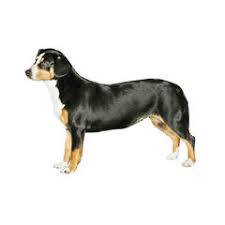 The Entlebucher is a medium-sized, compact, strongly muscled, elongated drover with ample bone. His herding style is driving, getting behind cattle and nudging them along. This requires an active, nimble, tough, and tireless dog. Too small a dog lacks the necessary power and too large lacks the necessary agility needed for the task. The Entle is longer than tall in a ratio of about 10 to 8. The coat is short but dense, with a harsh close-fitting outer coat for protection and a dense undercoat that supplies warmth without causing overheating. The bright markings may emphasize the dog to the cattle it is herding. The gait is fluid and ground-covering.

The first description of a dog (the Entlebucherhund) from the valley of Entlebuch was in 1889. At the time, the Entlebucher and Appenzeller were lumped as the same breed. In 1913, four of the small naturally bobtailed dogs were exhibited, and Professor Albert Heim, the expert on Swiss breeds, advocated their independent recognition. Nonetheless, crosses with German Shepherd Dogs in the early 1900s threatened the breed. World War I further threatened them; after the war not a single one could be found. Efforts of several breeders resulted in a breed standard and club in 1926, and 17 Entlebuchers were located. The Entlebucher became eligible to compete in AKC herding events in 2007 and in the AKC Herding Group in 2009.

The Entlebucher is extremely devoted and loyal, tending to stay close to their family. They learn quickly but retain an independent nature, not afraid to make their own choices—especially if they feel they have the upper hand. They are very loyal and may be protective. Their loud bark may be their biggest protective asset. They tend to be suspicious of strangers. They are generally good with other dogs and pets; however they may try to herd other pets and children. Although males particularly can be assertive toward other dogs, most are pretty mellow unless provoked.

Entles are active dogs that like to run and roughhouse. They need a good, long play period or hike daily, plus activities such as agility, obedience, or tracking to challenge their mind. They are fairly quiet indoors as long as they are tired! They are strong for their size. The coat should be brushed once or twice a week, more when shedding. They prefer cool weather.