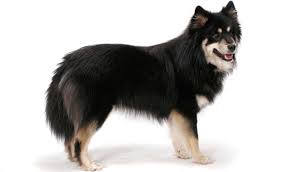 The Finnish Lapphund is a medium-sized dog with the look of a northern breed and the temperament of a herding breed. Bred to work outside, north of the Arctic Circle, they are strongly built and thickly coated. The breed has a greater substance than their size would suggest. Their bone is substantial and muscles are well developed. The coat is thick and profuse, with a straight, long outer coat that is very harsh and water-repellant. The undercoat, which is vital for insulation, is soft, very dense, and plentiful. Finnish Lapphunds must be agile and capable of sudden bursts of speed. They have a medium but powerful-appearing stride.

Ancient cave paintings and archeological digs suggest the nomadic Saame in Lapland (northern Finland, Sweden, and parts of Russia) have used spitztype dogs to herd reindeer for centuries, perhaps for thousands of years. The dogs, which were little known to the outside world, worked as gatherers, not drovers, to keep the herds together. In the 1900s, their use as herders diminished as snowmobiles took their place and the Saame became less nomadic. Invasions during World War II further damaged the remaining population, and a distemper outbreak after the war almost wiped them out completely.

Realizing the breed could be lost without intervention, a group of Finnish dog breeders collected dogs, adopted a breed standard, and gained recognition by the Finnish Kennel Club in 1945. Both shorter and longer haired dogs were included together, as both often appeared in the same litters of the breed, then called Lapponian Shepherd Dogs. In 1967, the long-coated variety was recognized separately as the Lapinkoira, or Finnish Lapphund. The short-coated variety was called the Lapinporokoira, or Lapponian Herder. The Finnish Lapphund is now known as the Suomenlapinkoira in Finland, where it is one of the most popular breeds. The breed remained largely unknown in America. In 1987, an effort was made to establish them in America. Breed numbers grew slowly. The UKC recognized the Finnish Lapphund in 1994; and in 2011, the Finnish Lapphund became a member of the AKC Herding Group.

Lappies are gentle and devoted companions. They learn quickly but can also be independent and strong-willed. They tend to be submissive toward people. The breed has won many obedience awards in their native land. They generally get along well with other dogs and pets. Befitting their herding heritage, they bark when excited but, generally, not otherwise. They are very alert and aware of their surroundings.

As a breed developed to be on the move, the Lapphund enjoys an active lifestyle. They enjoy a long hike or vigorous game, preferably every day. They thrive on mental challenges, so training activities such as agility or obedience are helpful. Although an active breed, they are relatively calm indoors even if they miss a day of exercise. Their coat is thick and requires brushing once or twice a week— more during shedding season—to prevent matting. They much prefer cool weather.