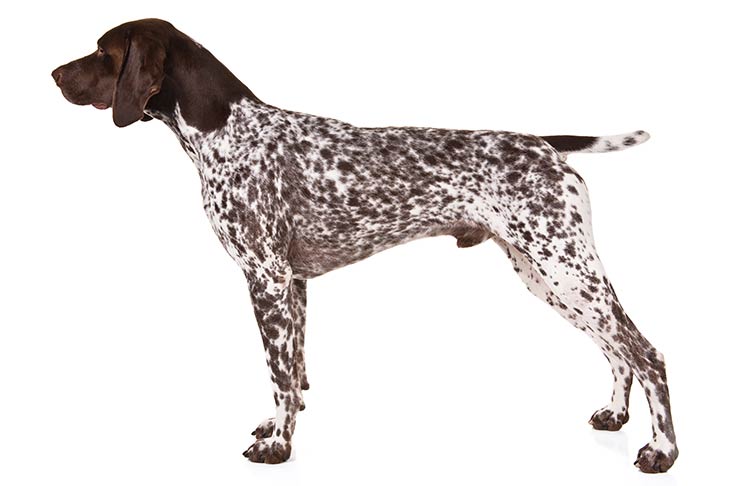 The German Shorthaired Pointer is an all-purpose close-working dog who combines agility, power, and endurance. He is square or slightly longer than tall; although he has a short back, he should stand over plenty of ground. He should have a clean-cut head, graceful outline, strong quarters, and an athletic physique. His coat is short and tough.

EXERCISE REQUIREMENTS 5 out of 5

The German Shorthaired Pointer is one of the most versatile of hunting breeds, combining pointing, retrieving, and trailing abilities. This versatility arose through the purposeful blending of various breeds beginning as early as the seventeenth century.

Crosses of the Spanish Pointer (a heavy type of pointer) with the Hannover Hound (a strain of scenthounds) resulted in a heavy houndlike dog that could both trail and point. Although all the early breeders agreed upon the goal of an all-purpose hunting dog, not all agreed upon how to achieve it. Crosses with the English Pointer were controversial but bestowed upon the breed a more stylish look and nose-up hunting mode. It also imparted a dislike of water and an aversion to attacking quarry. Further breeding eliminated these unwanted pointer characteristics.

In the early 1800s two Deutsch Kurzhaars (as the breed was originally known), Nero and Treff, distinguished themselves against other pointing breeds at the German Derby and, through the success of their descendants, are often credited as the modern Shorthaired’s foundation. The breed was recognized in the late 1800s in Germany with the first Shorthaired coming to America in the 1920s. The German Shorthaired Pointer gained AKC recognition in 1930. The breed soon gained a reputation as the ideal dog for the hunter who wanted only one dog that could do it all.

The German Shorthaired Pointer’s idea of heaven is a day hiking in the field and an evening curled up by its owner’s side. This is an active dog that can become frustrated and “creative” if not given ample daily exercise, both mental and physical. He is a devoted family pet, although at times he may be overly boisterous for small children. Because part of their heritage includes hunting mammals, some can be assertive toward small pets unless raised with them. They are a sensitive breed, responsive to gentle training. Some can whine or bark a lot.

Bred to be an active hunting companion, this breed has a good deal of energy and requires a good deal of exercise. He thrives on mental and physical stimulation and can get both by hiking or playing with his owner for a long period—at least an hour—every day. Many like water and will swim if given the chance. The grooming needs are minimal, consisting only of occasional brushing to remove dead hair.