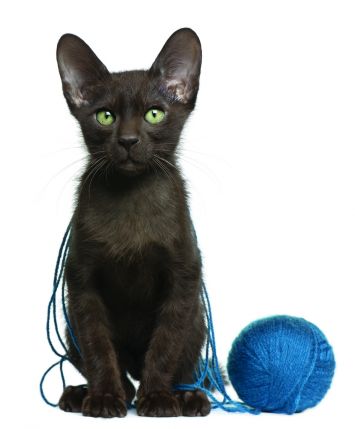 The overall impression of the ideal Havana Brown is a cat of medium size with a rich, solid color coat and good muscle tone. Due to its distinctive muzzle shape, coat color, brilliant and expressive eyes, and large forward tilted ears, it is comparable to no other breed.

More distinctive than the muzzle, ears, or mink-like coat is the Havana Brown’s personality. Although still quite rare, Havanas have built an enthusiastic following. Havana Browns are affectionate, gentle, highly intelligent, and, unlike their Siamese compatriots, quiet. They are remarkably adaptable and agreeable cats, and adjust to almost any situation with poise and confidence. Havanas must have human interaction if they are to live happy, healthy lives. They crave attention from their human companions and are not content unless they can be by your side, helping you with your household tasks. Havanas love to reach out and touch their favorite humans; they often nudge their human friends with an out-stretched paw as if asking for attention. Fetch is a favorite Havana game, and they can often be found carrying toys and stray objects around in their mouths. If you’ve misplaced a sock or some other small, easily carried object, check your Havana’s cat bed. You might find that it has magically found its way there.

The Havana Brown, a cat the color of chocolate, is another breed that comes from the mysterious land of Siam. Solid brown cats were described and depicted in The Cat-Book Poems, a manuscript of verses and paintings written in the city of Ayutthaya, Siam, some time between 1350 c.e. when the kingdom was founded, and 1767 c.e. when the city was destroyed by invaders from Burma. These brown cats appear in the manuscript alongside royal Siamese, black and white bicolors, and silver-blue Korats. The people of Siam considered the burnished brown cats very beautiful and believed they protected their human companions from evil. Solid brown (self-brown) cats were among the first felines to come to England from Siam (now Thailand) in the late 1800s. Early records describe these cats as “Siamese, with coats of burnished chestnut, and greeny-blue eyes.” It is believed that these imports were not all of the same genetic types, but rather represent what today would be called Burmese, chocolate point Siamese, Tonkinese (Burmese/Siamese hybrids), and Havana Browns. It’s hard to tell one from another from mere descriptions. Solid brown cats were exhibited in Europe during the late 1800s and the early 1900s. A brown took first prize at a show in England in 1888, indicating that, at that time, fanciers valued and treasured brown cats. At a 1928 cat show, the British Siamese Cat Club gave a special award to the cat with “the best chocolate body.” Writers of the day described these cats as “chocolate-colored Siamese, that is, the same color all over.” Soon after, however, self-browns fell from grace. In 1930 the Siamese Cat Club announced, “The club much regrets it is unable to encourage the breeding of any but blue-eyed Siamese.” Solid brown cats lacking blue eyes were accordingly banned from competition and disappeared from the cat fancy. Self-browns made their comeback in the early 1950s when a handful of English breeders decided brown was still beautiful. Working first separately and then together, these breeders studied chocolate gene inheritance and then started a breeding program, apparently using Siamese, domestic shorthairs, and Russian Blues. The breeders were striving to produce a solid-colored cat in the chocolate point coloring of the Siamese, rather than the sable coloring of the Burmese. At that time in England, the only recognized foreign breeds other than the Siamese were the Abyssinian and the Russian Blue. In 1952 the first solid chocolate kitten to be registered in England was born. This kitten, Elmtower Bronze Idol, became the foundation cat for the new breed. Bronze Idol was produced by mating a seal point Siamese that carried the chocolate gene with a solid black cat also carrying chocolate. The black cat was the offspring of a black cat bred to a seal point Siamese. Since chocolate coloration is governed by a recessive gene, Bronze Idol had to receive the gene from both parents to express the trait. In 1958, the Governing Council of the Cat Fancy accepted the breed for championship competition under the name Chestnut Brown Foreign. Later, the breed was renamed Havana. Two stories exist regarding the naming of the breed. One claims that the Havana was named after a rabbit breed of the same color. The other maintains the Havana was named after the Havana tobacco because it has the color and matt appearance of a Havana cigar. The first Havanas reached America in the mid-1950s. The breed was recognized in 1959 under the name Havana Brown, and in 1964 CFA granted the Havana Brown championship status. In 1974, the gene pool was closed in North America, which many breeders felt was much too early in the breed’s development, given that the breed was, and still is, quite rare. By the early 1990s, Havana Brown numbers were dwindling, and breeding closely related cats was necessary because no unrelated cats were available. Breeders became very concerned about the Havana’s future as a viable breed, and they contacted Dr. Leslie Lyons Ph.D. at the Veterinary Genetics Laboratory at University of California, Davis for help in developing an outcross program. The Winn Feline Foundation, a non-profit organization that supports studies to improve cat health, funded the project so Veterinary Genetics Laboratory could analyze the Havana Brown’s genetic makeup. The study showed the Havana badly needed outcrosses to maintain the breed’s health and diversity. Breeders petitioned CFA to open the breed to outcrossing. In 1997, CFA voted to allow the Havana Brown certain limited outcrosses to chocolate point and seal point Siamese, certain colors of Oriental Shorthairs (breeders favor solid ebony and solid chestnut), and unregistered solid black and solid blue domestic shorthairs. Kittens from a Havana Brown and an allowable outcross could then be mated back to a Havana Brown, at which point the offspring were considered registrable and showable Havana Browns provided they met the color standard. To date, breeders report the program has been successful in enlarging the gene pool and keeping the breed healthy.

Torso medium in length, firm, and muscular. Adult males tend to be larger than their female counterparts. Overall balance and proportion rather than size to be determining factor. The neck is medium in length and in proportion to the body. The general conformation is mid-range between the short-coupled, thick set and svelte breeds.

When viewed from above, the head is longer than it is wide, narrowing to a rounded muzzle with a pronounced break on both sides behind the whisker pads. The somewhat narrow muzzle and the whisker break are distinctive characteristics of the breed and must be evident in the typical specimen. When viewed in profile, there is a distinct stop at the eyes; the end of the muzzle appears almost square; this illusion is heightened by a well-developed chin, the profile outline of which is more square than round. Ideally, the tip of the nose and the chin form an almost perpendicular line. Allow for sparse hair on chin, directly below lower lip.

Large, round-tipped, cupped at the base, wide-set but not flaring; tilted forward giving the cat an alert appearance. Little hair inside or outside.

Ideal specimen stands relatively high on its legs for a cat of medium proportions in trunk and tail. Legs are straight. The legs of females are slim and dainty; slenderness and length of leg will be less evident in the more powerfully muscled, mature males. Hind legs slightly longer than front. Paws are oval and compact. Toes: five in front and four behind.

Medium in length and in proportion to the body; slender, neither whiplike nor blunt; tapering at the end. Not too broad at the base.

Short to medium in length, smooth and lustrous.

Rich and even shade of warm brown throughout; color tends toward red-brown (mahogany) rather than black-brown. Nose leather brown with a rosy flush. Paw pads rosy toned. Whiskers brown, complementing the coat color.