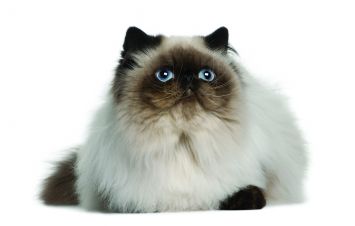 The Himalayan is a hybrid breed identical to the Persian, but distinguished by the points on the cats’ extremities (the facial mask, feet, ears, and tail) which results in a Persian-type cat with the coloring and deep blue eyes of the Siamese-patterned cat. The ideal Himalayan is a strong cat with excellent boning and musculature, a well-balanced cat, giving the impression of robust power.

ACTIVITY LEVEL 1 out of 5

GROOMING REQUIREMENTS 5 out of 5

“Himmies,” as they are sometimes called, are wonderful indoor cat companions. They are gentle, calm, and sweet-tempered, and possess a playful side as well. Like the Siamese, Himalayans love to play fetch, and a scrap of crumpled paper or a kitty toy will entertain them for hours, or until their next nap. Himalayans are devoted and dependent upon their humans for companionship and protection. They crave affection and love to be petted and groomed, which is fortunate, since every Himalayan owner will spend part of each day doing just that. Like their Persian siblings, they are docile and won’t harass you for attention the way some breeds will. They possess the same activity level as the Persian, and they are not vocal like the Siamese.

The first deliberate cross between a Siamese and a Persian was made in 1924 by a Swedish geneticist. In 1935 that the first pointed pattern longhair was born. In the early 1930s, two Harvard medical researchers crossed a Siamese female with a black Persian male, not to create a new breed, but to establish how certain characteristics were inherited. This mating produced a litter of black, shorthaired kittens. They then bred a black Persian female with a Siamese male. The outcome was the same. This is not surprising, since longhair and the colorpoint pattern are both governed by recessive genes. Both parents have to possess the genes in order for the traits to be expressed in the offspring. By crossing a female from the second litter with a male from the first, they produced Debutante, a cat that possessed the Siamese body type and color pattern and the long hair of the Persian. During the same year, British and American fanciers hoped to produce a pointed pattern breed with the Persian hair type and conformation. World War II interfered with these efforts. In 1950 American Marguerita Goforth succeeded in breeding the long awaited Persian-like colorpoint. CFA and ACFA recognized the breed in 1957 under the name Himalayan, named for the color pattern found in other animals such as the Himalayan rabbit. By 1961, all major U.S. cat associations recognized the Himalayan.

Because Himalayans are regularly crossed with Persians, many cat associations have special rules for Himalayan-Persian hybrids, usually allowing them to be shown either as Himalayans or Persians, depending upon their appearance. Whatever the breed is called, the Himalayan remains a popular breed with a solid following.

Cobby, firm, well-rounded mid-section, in proportion. Medium to large in size. Back short and level. The chest is to be deep; equally massive across the shoulders and rump with a short, well-rounded abdomen and ribs; boning heavy, sturdy and in proportion. Musculature firm and well developed, not overly fat.

Round, broad, smooth domed, with great breadth. Should be medium to large in size and in proportion to body. Jaws broad and powerful with perfect tooth occlusion. Cheeks should be full and prominent. Overall sweet expression. Chin strong, full, well-developed, fitting into the face. Nose almost as broad as long with open nostrils. Muzzle should be short, broad and full. In profile short, snub nose, definite break directly between eyes. Forehead, nose, and chin in straight line. Neck short, thick, and well-muscled.

Small and round tipped, not unduly open base. Set wide apart, fitting into contour of head.

Large, round, and full. Set level and far apart giving a sweet expression to the face, eye color has equal importance to size and shape. Deepest blue preferred, but light to medium blue is acceptable.

Legs: large bones, well-developed and with firm musculature. In front view, the forelegs should be short and straight from breadth of chest adding to sturdy appearance, not to have a bull dog appearance. When viewed from the rear, the legs should be straight. Feet round and large.

Short and straight. In proportion to body length.

Long all over the body. Full of life. Dense undercoat giving the coat full volume. Ruff should be immense. Seasonal variations in coat shall be recognized.

All pointed colors and pointed patterns. Clear color preferred with subtle shading allowed. Allowance should be made for darker shaded areas on coats of mature cats. There must be a definite contrast between the body and point color. The points, comprising of the ears, legs, feet, tail, and mask, must show the basic color of the cat.