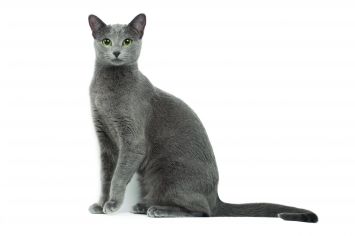 The Korat’s general appearance is of a silver blue cat with a heavy silver sheen, medium sized, hard bodied, and muscular. This cat is all smooth curves, with huge eyes that are luminous, alert, and expressive. The breed has a perfect physical condition and alert appearance.

Korats are not as vocal as their Siamese comrades–they have other ways of getting their wishes across. At dinnertime they’ll wrap themselves around your ankle, clamber up onto your shoulder, and perhaps give you a gentle love-bite on the shin if you don’t hurry up with the cat food—but given something important to say, they will speak their minds. On the cat-activity level scale, they are an 8: social, playful, and full of life, but not bouncing-off-the-walls hyper. They also possess high intelligence. Like the Siamese, Korats are fetchers of tossed toys, chasers of sunbeams and paper scraps, cats whose favorite game is the one in which their esteemed human companions take an active part. Korats crave affection from their humans, and will use their brainpower to gain possession of your lap, your arms, and your heart.

The earliest illustrations and descriptions of the Korat (pronounced ko-RAHT) can be found in The Cat-Book Poems, a manuscript of verses and paintings written in the city of Ayutthaya, Siam, some time between 1350 c.e. when the kingdom was founded, and 1767 c.e. when the city was destroyed by invaders from Burma. When the book was written can’t be more accurately determined since back then manuscripts were handwritten on palm-leaf or bark parchment. When a manuscript became too old, it was painstakingly reproduced by hand onto new materials. This makes it difficult to date the original documents. Still, it’s likely the oldest document about cats in existence. The manuscript illustrates and describes in verse seventeen kinds of lucky cats, including the Siamese, Burmese, Havana Brown, and Korat. The artists and writers of the document, whose names have long been forgotten, describe the Korat as a good luck cat, with eyes the color of new rice that shine like dewdrops on a lotus leaf, and a body the color of rain clouds and silver. Unlike Siamese cats that were primarily owned by Thailand’s royalty, Korats were (at least originally) cats of the common people, and were highly prized as living good luck charms. Called Si-Sawat (si meaning color and sawat meaning the silver-blue seed of a fruit plant of the same name), Korats were never sold, but rather were given as special expressions of respect, honor, and esteem. As the story goes, new brides were given a pair of Si-Sawat cats to ensure happy, fortunate marriages. Other tales associate the Korat with ceremonies to bring critical rainfall to the new rice crops. One story tells how Korats were paraded through northeast Thai villages, being sprinkled with water to assure rain would fill the rice paddies with much-needed water. Whether these stories are true or not isn’t known, but they add to the mystique of the good luck cat of Siam. Whether The Cat-Book Poems was produced during the mid-fourteenth century or the mid-eighteenth makes little difference. Either way, the Korat can be deemed among the oldest of the domestic cat breeds, along with its compatriots, the Siamese, Burmese, and Havana Brown, also described in the manuscript.

In 1966, the American Cat Association (ACA) became the first North American association to recognize the Korat, followed by CFA later the same year. Today the Korat is recognized by all the North American registries and, while still quite rare, is promoted by a committed, passionate group of people who value the breed’s history, beauty, and grace.

Semi-cobby, neither compact nor svelte. The torso is distinctive. Broad chested with good space between forelegs. Muscular, supple, with a feeling of hard coiled spring power and unexpected weight. Back is carried in a curve.

When viewed from the front, or looking down from just back of the head, the head is heart-shaped with breadth between and across the eyes. The eyebrow ridges form the upper curves of the heart, and the sides of the face gently curve down to the chin to complete the heart shape. Profile well-defined with a slight stop between forehead and nose which has a lion-like downward curve just above the leather. Chin and jaw strong and well-developed, making a balancing line for the profile and properly completing the heart-shape. Neither overly squared nor sharply pointed, nor a weak chin that gives the head a pointed look.

Large, with a rounded tip and large flare at base, set high on head, giving an alert expression. Inside ears sparsely furnished. Hairs on outside of ears extremely short and close.

Large and luminous. Particularly prominent with an extraordinary depth and brilliance. Wide open and oversized for the face. Eye aperture, which shows as well-rounded when fully open, has an Asian slant when closed or partially closed. Eye color luminous green preferred, amber cast acceptable. Kittens and adolescents can have yellow or amber to amber-green eyes; the color is not usually achieved until the cat is mature, usually two to four years of age.

Legs well-proportioned to body. Distance along back from nape of neck to base of tail appears to be equal to distance from base of tail to floor. Front legs slightly shorter than back legs. Paws oval. Toes five in front and four behind.

Medium in length, heavier at the base, tapering to a rounded tip. Nonvisible kink permitted.

Single. Hair is short in length, glossy and fine, lying close to the body.

Silver-tipped blue all over, the silver should be sufficient to produce a silver halo effect. The hair is usually lighter at the roots with a gradient of blue which is deepest just before the tips, which are silver. Adults should be without shading or tabby markings. Allow for ghost tabby markings in kittens. Where the coat is short, the sheen of the silver is intensified.