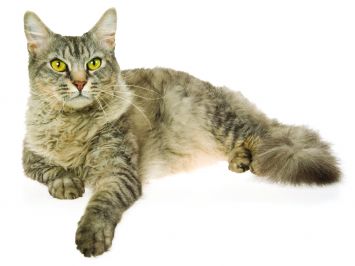 The LaPerm breed is a naturally occurring mutation producing curly coats in both long- and shorthaired cats. They are medium sized, of moderate type. All parts of body are in harmony with the size of cat. This breed matures in two to three years.

LaPerms are gentle, people-oriented cats that are affectionate without being overly demanding or clingy. They adore human companionship and adapt well to indoor or apartment living as long as they get the requisite amount of playing and pampering. Like most cats, LaPerms develop the closest bond with their human friends when they get regular human interaction and affection. LaPerms are agile and active. Like their barn cat ancestors, they enjoy a good game of chase, and love pouncing on the catnip mouse. They particularly enjoy interactive toys in which you take an active role. Inquisitive by nature, they always want to stick their noses into all household activities. Unlike many active breeds, the LaPerm is quite content to sit in your lap for some quality petting and pampering after they’re done racing about the house. Vocally quiet, LaPerms speak up only when they have something of extreme importance to say, such as bringing your attention to their empty food dishes. However, they enjoy an occasional quiet chat with their favorite people, particularly if their human companions are doing most of the chatting.

At first glance, the LaPerm looks like the cat just back from a grooming salon. However, Mother Nature is this breed’s only stylist. Also called the Dalles LaPerm, the LaPerm is one of the newly accepted breeds, and has been around since the 1980s. The LaPerm’s journey began in a cherry orchard in The Dalles, Oregon. In early March of 1982, an ordinary brown tabby barn cat named Speedy gave birth to six kittens. The owners, Linda and Richard Koehl, noticed one of the kittens looked very different from her littermates. Instead of the fine down that covered the bodies of her siblings, she was entirely bald. In addition, she was smaller than her littermates and had larger ears and a longer body. When the kitten was about eight weeks old, soft curly hair sprouted from her hairless body. As she grew, she developed a soft wavy coat. Appropriately, Linda Koehl named the cat Curly. When Curly matured, Linda Koehl discovered her soft fur felt so inviting to touch that Koehl found herself picking up and cuddling the cat. Not only was Curly’s coat unique, she had such a sweet, gentle, trusting personality that Koehl found herself becoming a bonafide cat lover, quite a leap for someone who previously owned cats only for their efficient, all natural pest control. Curly produced her own litter of five male tabby kittens, all of whom were bald at birth. Like their mother, all soon sprouted coats of curly hair. During the next ten years, Linda Koehl made no attempt to control the breeding or keep track of the curly litters. The curly coat is governed by a dominant gene, which means only one parent need possess the gene in order to produce curly-coated offspring. Because of this, and because the gene pool was relatively small, the number of curly-coated cats grew rapidly. In 1992, ten years after Curly’s birth, Koehl entered four of her curly cats into a CFA show in Portland, Oregon, to see what professional exhibitors and judges had to say. A breed name was required in order to register for the show, so Koehl named Mother Nature’s new creation the LaPerm, since the coat looks like it has a permanent wave. Koehl was astonished by the enthusiastic reception her cats received, and she was completely unprepared when the judges told her the breed was unknown to the cat fancy and should be preserved.  With the help of others, Koehl developed a breeding program and started the long and involved process of gaining recognition for the LaPerm. At this time, the three largest North American associations, ACFA, CFA, and TICA, accept the LaPerm for championship.

Moderate in size with medium fine to medium boning. Hips are slightly higher than shoulders. Allowances are made for larger size in males, as long as they remain balanced and in proportion.

Continue modified wedge of head; slightly flared and cupped; medium to large. Full furnishings and earmuffs with lynx tipping preferred on longhair; not required on shorthair.

In proportion to body; tapering from base to tip.

All genetically possible colors and patterns. Cats with no more than a locket and/or button shall be judged in the color class of their basic color, with no penalty for such locket or button.

Semi-longhair; coat loose, bouncy, springy; light and airy enough to part with a breath. Stands away from body; curls preferred over waves; unkempt appearance (“Gypsy Shag” look); neck ruff at maturity. Longest curls at base of ears and tail, and in ruff; tightest curls in ruff and at base of ears; tail plumed with some curling.

Short to approximately medium-long; coat springy, curly or wavy; stands away from body with waves over most of cat. Tail like bottlebrush, not plumed; may be wavy. No ruff, ringlets, or earmuffs. Texture may be harder than longhair.