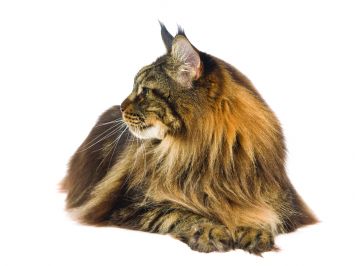 The Maine Coon is solid, rugged, and can endure a harsh climate. A distinctive characteristic of this cat is the smooth, shaggy coat. This breed is well-proportioned, has a balanced appearance, and has adapted to varied environments.

No breed has a monopoly on love and affection, but there’s got to be some good reason that Maine Coons have clawed their way up from near extinction to the prized place of America’s second most popular breed (according to the CFA’s registration totals). Maine Coon fans say that the popularity is due to the breed’s large size, intelligence, luxuriant coat, hardy disposition, and devotion to their human family.

Maine Coons are kittens in big cat suits, gentle giants who are playful well into old age, as well as jumbo-sized packages of loving devotion. Maine Coons can also be reserved around people with whom they’re not familiar, probably due to their jumbo-sized brains. Given time, however, even the most cautious adapt. This initial adjustment period is actually a decision-making process; Maine Coons are deciding if these new humans have proven themselves worthy of trust. As soon as they make up their minds, however, they form close bonds with the entire household and become loving and devoted.

Most want to be near you but not on your lap. They are true family members and participate in all family routines, whether watching you channel surf from the comfort of the couch, or following you from room to room. As befits a former seafarer, Maine Coons are fascinated by water, perhaps because their thick coats are water-repellent and won’t become annoyingly soaked as easily as a thinner coat would. Some will join their humans in the shower briefly, or at least walk around on the wet floor after you get out. They prefer to stand on the edge of the tub, however, and touch the water with a curious paw.

Maine Coons, like American Shorthairs, are considered native to America because they’ve been on this continent since the colonial days, and perhaps longer. How they got here in the first place and where their progenitors came from, however, is anyone’s guess, since none of the local colonists happened by with their camera phones to record the event.

Many imaginative stories exist about the origin of the breed (some more believable than others), but hard proof is as elusive as a cat at bath time. One story alleges that the breed is a raccoon/domestic cat hybrid, thus the name Maine Coon. Even though both raccoons and Maine Coons have lush, long tails and the tendency to dunk their food into their drinking water, such a union is biologically impossible. Another anecdote, unlikely but at least possible, holds that the Maine Coon was produced by bobcat/domestic cat trysts, which would explain the ear and toe tufts and the impressive size of the breed. A more imaginative story claims that Maine Coons are descendants of longhaired cats belonging to Marie Antoinette. The Queen’s cats and other belongings were smuggled to America by a captain named Clough, who was preparing to rescue the Queen from her rendezvous with the guillotine. Unfortunately, the Queen lost her head, and the cats ended up staying with Clough in Maine. Last, but not least, is the tale of a sea captain named Coon who, in the 1700s, brought longhaired cats with him on his excursions to America’s northeastern coast. Allegedly, these longhaired buccaneers mixed with the local population while on shore leave.

This last story has at least a ring of truth. Seafarers who used cats to control rodent populations on their sailing ships probably brought some longhaired cats with them to the New World. Some of the cats went ashore when they reached the northeastern coast and established themselves on the farms and in the barns of the early settlers. Given Maine’s severe climate, those initial years must have been tough on cat and human alike. Only the breed’s strongest and most adaptable survived. Through natural selection, the Maine Coon developed into a large, rugged cat with a dense, water-resistant coat and a hardy constitution.

Regardless of where the breed came from, the Maine Coon was one of the first breeds to be recognized by the late nineteenth-century cat fancy, and became an early favorite. However, in the early 1900s, as new and more exotic breeds were brought into the country, Maine Coons were abandoned for Persians, Angoras, and others. By 1950, the breed had all but vanished and in fact was declared extinct in the 1950s.

Fortunately, the announcement of the Maine Coon’s demise was greatly exaggerated, and today these cats have regained their former glory, second only to the Persian in popularity.

Muscular, broad-chested. Size medium to large. The body is long with all parts in proportion to create a well-balanced rectangular appearance with no part of the anatomy being so exaggerated as to foster weakness. Allowance should be made for slow maturation.

Medium in width and slightly longer in length than width with a squareness to the muzzle. Cheekbones high. Muzzle visibly square, medium in length, and blunt ended when viewed in profile. It may give appearance of being a rectangle but not appear to be tapering or pointed. Length and width of the muzzle proportionate to the rest of the head and present a pleasant, balanced appearance. The chin should be strong, firm, and in line with the upper lip and nose. Head should exhibit a slight concavity when viewed in profile.

Large, well-tufted, wide at base, tapering to appear pointed. Set approximately one ear’s width apart at the base; not flared.

Large, expressive, wide set with an opened oval shape. Slightly oblique setting with slant toward outer base of ear. Eye color can be shades of green, gold, green-gold, or copper. Blue eyes or odd eyes are also allowed for white- or bicolor- (including vans) patterned cats.

Legs substantial, wide set, of medium length, and in proportion to the body. Forelegs are straight. Back legs are straight when viewed from behind. Paws large, round, well-tufted. Five toes in front; four in back.

Long, wide at base, and tapering. Fur long and flowing.

Heavy and shaggy; shorter on the shoulders; longer on the stomach and britches. Frontal ruff. Texture silky with coat falling smoothly.

Any color or pattern with the exception of those showing hybridization resulting in the colors chocolate, lavender, the Himalayan pattern; the unpatterned agouti on the body (Abyssinian-type ticked tabby) or these combinations with white.