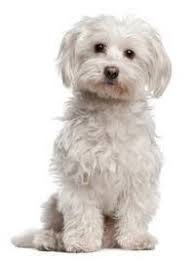 Even though the Maltese is best known for a beautiful coat, this dog’s body structure, facial expression, and overall carriage are essential components of the type. The Maltese is a diminutive dog with a compact, square body, covered all over with long, flat, silky, white hair hanging almost to the ground. The expression is gentle yet alert. This is a vigorous dog, with a jaunty, smooth, flowing gait. The well-built Maltese seems to float over the ground when trotting.

The Maltese is the most ancient of the European toy breeds, and among the oldest of all breeds. The island of Malta was an early trading port, visited by Phoenician sailors by 1500 b.c. Maltese dogs are specifically mentioned in writings as early as 300 b.c. Greek art includes dogs of Maltese type from the fifth century on. There is evidence that they even erected tombs to favored Maltese. Although the dogs were often exported and subsequently widely distributed throughout Europe and the Orient, the core population on Malta remained relatively isolated from other dogs, resulting in this distinctive dog that bred true for centuries. Though the Maltese’s hallmark is its long, silky, dazzling white hair, early Maltese came in colors other than white. By the early fourteenth century, Maltese had been brought to England, where they became the darlings of the upper-class. Writers of the succeeding centuries continually commented upon their diminutive size. Still these little dogs were never commonplace, and an 1830 painting entitled “The Lion Dog from Malta—Last of His Race” suggests that the breed may have been in danger of extinction. Soon after, two Maltese were brought to England from Manila. Although originally intended as a gift for Queen Victoria, they passed into other hands and their offspring became the first Maltese exhibited in England. At this time, they were called Maltese Terriers, despite the lack of terrier ancestry or characteristics. In America, the first Maltese were shown as Maltese Lion Dogs around 1877. The name lion dog probably arose from the habit of dog fanciers, particularly those in the Orient, of clipping the dogs to look like lions. The AKC recognized the breed as the Maltese in 1888. The Maltese slowly increased in popularity, and now it ranks as one of the more popular pet toy breed dogs.

Long a favorite lapdog, the gentle Maltese fills this role admirably. The Maltese also has a wild side, and loves to run and play. Despite the innocent look, this is bold and feisty pup who may challenge larger dogs, and some enjoy barking. The Maltese is reserved with strangers.

The exercise requirements of the Maltese are easily met with indoor games, a romp in the yard, or a short walk on leash. The coat needs combing every one or two days. Show coats may be “wrapped” for protection. The white coat may be difficult to keep clean in some areas. Pets may be clipped for easier care.