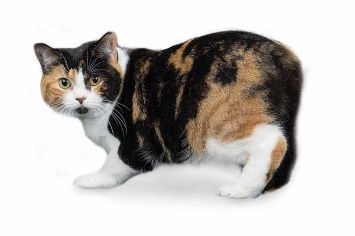 The overall impression of the Manx cat is that of roundness; round head with firm, round muzzle and prominent cheeks; broad chest; substantial short front legs; short back which arches from shoulders to a round rump; great depth of flank and rounded, muscular thighs.

FRIENDLINESS TO CHILDREN 5 out of 5

The Manx’s personality is probably the reason the breed has won such a strong following despite the physical difficulties. Manx cats make great companions. They are intelligent, fun-loving cats that manage to express themselves very well without tails to swish around. Manx are particularly noted for their strong bonds of devotion and loyalty to their chosen humans and enjoy spending quality time with them, whether it’s sitting beside their humans enjoying quiet time, or racing around the house after a tossed sponge ball or a whirling feather-tufted toy. Manx are exceptional jumpers because of the powerful back legs. If sufficiently motivated, they will find a way into the most secure cupboard. No shelf is safe from the high-flying Manx.

They get along particularly well with other cats and well-behaved dogs and enjoy romps with these compatible companions. Despite their playful temperament, they are usually very gentle. Their playful yet tractable dispositions make them good pets for families with children. They are fascinated by water; perhaps this fascination comes from originating on a small piece of land surrounded by the liquid. However, if you dunk them in the nasty stuff they quickly lose their fascination.

The Manx has existed for many centuries on the Isle of Man, located in the Irish Sea between England and Ireland. Since the Isle did not have an indigenous feline species from which the Manx could develop, it is surmised that domestic cats were introduced by human settlers and explorers. Exactly who and when is uncertain.

One story has it that the cats were aboard a ship of the Spanish Armada that was wrecked on the Isle of Man in 1588. The resourceful cats supposedly swam ashore at Spanish Point and set up mousekeeping on the Isle. Another story claims that the Manx was introduced by Phoenician traders who transported the cats from Japan. Still another says that cats arrived with the Viking settlers who colonized the Isle of Man.

Regardless of how cats got on the Isle, they presumably arrived with their tails intact. Geneticists believe that the Manx’s taillessness is the result of a spontaneous mutation within the Isle’s domestic cat population. Genetically, the Manx and other short tailed domestic felines are quite different. The Manx’s tail, or lack thereof, is governed by a dominant gene, while most other short-tailed breeds, such as the Japanese Bobtail, have tails governed by recessive genes. Given the Isle’s closed environment and small gene pool, the dominant gene easily passed from one generation to the next.

Inhabitants of the Isle, unaware of or unimpressed by boring scientific theory, invented more interesting tales to account for the Manx’s lack. One contends that the Manx is an impossible mix between a cat and a rabbit. Another claims that Irish invaders stole the cats’ tails to use for their helmet plumes. A third says two Manx cats were passengers on Noah’s Ark, but as they were the last to board Noah slammed the door on their tails.

The modern history of the Manx is better documented, if more mundane. The Manx was a well-established and popular breed, supported by an enthusiastic group of Manx owners. King Edward VIII was reportedly a Manx fan and often attended cat shows featuring the breed. The British formed the first Manx club in 1901. The Manx journeyed to America by the 1880s (and probably earlier), as Manx cats are noted in earliest American cat registry records. Manx cats were at first transported from the Isle of Man but, as the demand grew, the supply waned. Today, Manx cats are in great demand because of their rarity, but pets can be found at adoption organizations fairly easily.

Solidly muscled, compact and well-balanced, medium in size with sturdy bone structure. The Manx is stout in appearance with broad chest and well-sprung ribs. The constant repetition of curves and circles give the Manx the appearance of great substance and durability, a cat that is powerful without the slightest hint of coarseness. Flank has greater depth than in other breeds, causing considerable depth to the body when viewed from the side. The short back forms a smooth, continuous arch from shoulders to rump, curving at the rump to form the desirable round look. Length of back is in proportion to the entire cat, height of hindquarters equal to length of body.

Round head with prominent cheeks and a jowly appearance that enhances the round appearance of the breed. In profile, head is medium in length with a gentle dip from forehead to nose. Well-developed muzzle, very slightly longer than it is broad, with a strong chin. Definite whisker break with large, round whisker pads. Short, thick neck.

Wide at the base, tapering gradually to a rounded tip. Medium in size in proportion to the head, widely spaced and set slightly outward. When viewed from behind, the ear set resembles the rocker on a cradle. The furnishings of the ears are sparse.

Large, round and full. Set at a slight angle toward the nose; outer corners slightly higher than inner corners. Color is gold to copper, odd eyed, blue eyed, green, or hazel as appropriate to the coat color.

Legs heavily boned, forelegs short and set well apart to emphasize the broad, deep chest. Hind legs much longer than forelegs, with heavy, muscular thighs and substantial lower legs. Longer hind legs cause the rump to be considerably higher than the shoulders. Hind legs are straight when viewed from behind. Paws are neat and round with five toes in front and four behind.

The Manx may have a rise of bone at the end of the spine. The rump is extremely broad and round.

Double coat is short and dense with a well-padded quality due to the longer, open outer coat and the close cottony undercoat. Coat may be thinner during the summer months. Texture of outer guard hairs is somewhat hard, appearance is glossy. A softer coat may occur in whites and dilutes due to color/texture gene link.

All colors and patterns with the exception of those showing evidence of hybridization resulting in the colors chocolate, lavender, the Himalayan pattern, or these combinations with white.