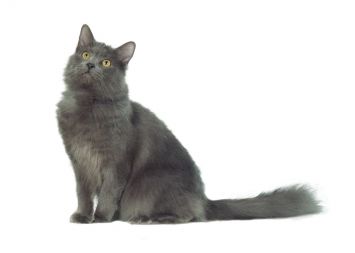 Nebelung cats look similar to the Russian Blue, but they are two separate breeds. The Nebulung is recognizable by its thick, shimmering blue coat and adored for its sweet, affectionate personality. Make sure you have plenty of time to spend with this loyal cat.

The best thing about Nebelungs is their personality. Affectionate, sweet, and loving, Nebelungs form close bonds of love and trust with their human companions and stay extremely devoted and loyal their entire lives.

Nebelungs are playful, affectionate, and intelligent, and follow their favorite humans from room to room to keep an eye on the action. Sit down, and your lap will quickly be filled by silky soft fur; Nebelungs enjoy sitting beside or in the laps of their chosen humans to receive their due of petting and pampering. They tend to bond with a select few humans and stay loving and dedicated throughout their lives.

This breed likes a steady routine, will learn yours quickly, and dislike disruptions to their habits; Nebelungs need time to adjust to household changes. They tend to adapt slowly to changes in their routines or the routines of their humans; if you go back to working full time after being at home for many months, Nebelungs may have trouble adjusting. It’s important to make sure that your Nebelung gets plenty of love and attention during times of change. If you must leave a Nebelung alone for long hours, provide a compatible cat companion to keep your Nebelung company while you’re away earning the cat food. Early socializing can help your Nebelung adapt more easily. They are soft-spoken unless something is seriously wrong, such as empty food dishes or cat boxes that are not up to the Nebelung standard of cleanliness. This breed tends to be particular about their environment, and will make their feelings known about litter boxes that offend their sensitive noses or cuisine that doesn’t meet their high standards.

Nebelungs are generally reserved around strangers, ranging from hiding-under-the-bed timid to warily eyeing intruders from a safe distance. Given the sometimes unpredictable behavior of some humans, this could be interpreted as a sign of this breed’s extreme intelligence. To their chosen family, however, Nebelungs are affectionate and playful.

The Nebelung (NAY-bel-ung) breed began the way so many of our breeds began—a stray cat wandered out of the mist and developed into a unique new breed. This breed’s saga began in the early 1980s, when a shorthaired black female feline and her black longhaired Angora-type suitor produced a litter of three. One of the shorthaired black females was given to the son of computer programmer Cora Cobb of Denver, Colorado, who named the kitten Elsa.

In August 1984, Elsa produced a litter of her own, with the help of a shorthaired Russian Blue-type tomcat. Both Elsa and her blue-haired boyfriend must have possessed the recessive gene for long hair, because Elsa’s litter of six included one beautiful longhaired solid blue male. Quite taken with the handsome blue fuzz ball, Cora Cobb adopted the kitten and named him Siegfried after the hero in her favorite Wagner opera, The Ring of the Nibelung. As Siegfried grew, Cobb was taken by Siegfried’s beauty and devoted personality— he was the most loving, devoted cat she’d ever known. When Elsa’s next litter, fathered by the same Russian Blue-type tom, produced a lovely longhaired female kitten that possessed many of Siegfried’s delightful characteristics, Cobb obtained her and named her Brunhilde, after the heroine in Wagner’s opera. The blue female was beautiful and sweet, and her silky hair was longer and lighter than Siegfried’s. Now that Cobb had a matching set of these loving and beautiful blue cats, she decided to see if she could preserve their beauty and loving temperament by breeding brother to sister. If she could produce cats as extraordinary and beautiful as these two, Cobb thought, everyone would want one.

When Cobb moved to El Paso, Texas, in 1985, she took Siegfried and Brunhilde with her. In 1986, Brunhilde accepted her brother as mate, and about two months later she produced a litter of three blue longhairs. To Cobb’s delight, all three inherited Siegfried’s Russian Blue body type and Brunhilde’s longer, glossy blue fur. Since Cobb was unfamiliar with the genetics of breeding cats, she didn’t know that blue, longhaired kittens were the only possible outcome of Siegfried’s and Brunhilde’s rendezvous. Both long hair and blue coloration are governed by recessive genes; to express those traits in their physical appearance each had to possess two copies of each gene. Since both Siegfried’s and Brunhilde had solid blue coloration and long hair, all offspring would have both traits as well.

Cobb named the breed the Nebelung, a German word that loosely means “creatures of the mist,” an appropriate name for a feline that magically vanishes into thin air when strangers come to visit. She decided to see what it would take to establish her new breed of cat. On the advice of TICA’s genetics chairperson, Dr. Solveig Pflueger, to whom Cobb turned for guidance in establishing her new breed, Cobb wrote the Nebelung’s standard almost word for word from the Russian Blue’s, except for the coat length and the general opening description. TICA accepted the Nebelung for registration in September 1987.

The Nebelung has appeared twice on the front cover of a Japanese cat magazine, and Nebelungs were shown at the 1989 TICA cat show in Paris, France. As of May 1, 1997, the Nebelung was granted championship status in TICA, a major step forward that brought the breed national and international attention. Today, Nebelungs are recognized by ACFA, CFF, and TICA, as well as the international associations the World Cat Federation (WCF), and Livre Officiel des Origines Félines (LOOF).

Well-proportioned and athletic. The overall body structure is long and graceful with medium boning. Both males and females well-muscled.

Modified wedge in good proportion to body. More pointed than rounded, although longer hair may give a rounded look. Straight line from tip of nose to tip of chin. Muzzle medium length; puffy whisker pads. Forehead straight to level of upper edge of eye. Tip of nose has such a shallow concave curve that it appears virtually straight. No stop, break, or nose bump.

Large and pointed, set to continue the modified wedge.

Very slightly oval, medium size, and widely spaced. Color green with yellow/green mixture allowed. In kittens, changing from yellow to green; should show green halo around pupil by eight months. As vividly green as possible at maturity; could be two years or more.

Legs long with medium boning. Feet medium-sized, well-rounded ovals with generous tufting between the toes. Appears to stand and walk on balls of feet.

Tail hair must be longer than on body. Length is in balance with the length of the body; ideally, at least equal to the body length from rump to shoulder blades.

Medium-long over body with increasing length from shoulder area to tail. Males may display neck ruff; females to lesser extent. Fur is longer on tail. Texture soft two-layered coat, suitable for all weather, resistant to water. Outer coat fine and silky; semi-long over body, beginning at shoulders where coat is slightly shorter. Pantaloons on hind legs. Adult coats may take up to 2 years to fully develop.

Coat color is blue, sound to the roots, with a soft lustrous sheen. Undercoat layer is very soft down, lighter blue in contrast to guard hairs of outer coat.