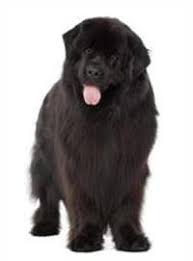 The Newfoundland is a large, heavily boned, powerful dog, strong enough to pull a drowning man from rough seas. The dog’s appearance is both huggable but imposing. This breed is slightly longer than it is tall. The gait gives the impression of effortless power, with good reach and drive, and the double coat is a soft, dense undercoat with a coarse, moderately long and straight outer coat. The dog’s soft expression reflects its benevolent and dignified temperament.

As its name suggests, the Newfoundland was developed on the coast of Newfoundland. Here the agreement about its origin ceases. Although it ultimately traces back to the Tibetan Mastiff, no actual record exists of Tibetan Mastiffs being brought to Newfoundland. Some authorities believe that it descends from the Tibetan Mastiff by way of the Great Pyrenees. In 1662, the first permanent colony at Roougnoust was settled, complete with Great Pyrenees dogs. These dogs were crossed with black English retrievers belonging to English settlers. Some Husky blood may also have been introduced. Whatever the ingredients, the result was a massive water-loving, cold-resistant dog found in either solid black or black and white coloration. The latter “Landseer” Newfoundland was only identified in 1779. The Newfoundland name predates it only by a few years, named after an individual dog called Newfoundland. The Newfoundland distinguished itself as an all-purpose water dog, hauling heavy fishing nets through the cold water and saving many people from watery graves. Its work didn’t stop on dry land; here it served as a draft dog and pack animal. European visitors were so impressed that they returned to Europe with many specimens, and it is here that the breed first entered the show ring. The export of dogs from Newfoundland, along with laws forbidding ownership of more than one dog, drove the breed’s numbers down in its place of origin. The breed’s stronghold switched to England, and American fanciers resorted to replenishing their stock with English dogs. After World War II, the tables turned, and American Newfoundlands were responsible for reviving the decimated English stock. Recovery in both countries is now complete, and the Newfoundland is one of the more popular of the giant breeds of dogs. Although the solid black color is most identified with the breed, the black and white Newfoundlands (dubbed Landseers after the well-known artist who first portrayed them) are also popular

This easygoing dog needs daily exercise to stay fit, either in the form of a moderate walk or short romp. It loves to swim and pull, especially in cold weather. Some breeders contend that Landseers tend to be more active than solids. It does not do well in hot weather. Its coat needs combing twice weekly, more when shedding. Newfs do drool and also tend to be messy drinkers.