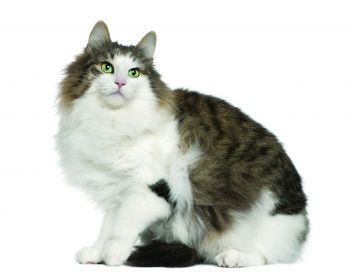 The Norwegian Forest Cat is a sturdy cat with a distinguishing double coat and easily recognizable body shape. This is a slow maturing breed, attaining full growth at approximately five years of age.

Natural athletes, Norwegian Forest Cats love to investigate counters, bookcases, and the loftiest peaks of their cat trees. Wegies are active and playful and retain their fun-loving spirit well into adulthood, but don’t be fooled by the breed’s impressive muscles and all-weather exterior. They are sweet, friendly, and family-oriented, and they love their human companions.

Despite the wild years in the forests of Norway—or perhaps because of it—they would much rather cuddle than prowl. Perhaps, because of years spent in Norway’s harsh climate, nothing fazes them much, either. They take new people and new situations in stride; as cats go, Forest Cats are the strong, silent types. They are conversely great purrers, particularly when perched beside their favorite humans. Outgoing and gregarious, they tend not to bond with one person, but rather love everyone unconditionally and enthusiastically.

The Norwegian Forest Cat, called the skogkatt (forest cat) in Norway, is a natural breed and despite a feral appearance is not a descendant or a hybrid of any wild cat species. Forest Cats probably arrived in Norway from Europe, descendants of domestic cats introduced to northern Europe by the Romans.

It is supposed that the Norwegian Forest Cat has existed for a long time, since several mentions of large, longhaired cats exist in Norse mythology. Estimates of when these cat tales were written vary greatly. Most Norse myths were passed down by oral tradition and were finally recorded in what was called the Edda poems, written sometime between 800 c.e. and 1200 c.e. These myths suggest that domestic cats have been in Norway for hundreds, possibly thousands, of years. Whether the cats portrayed in the myths are Forest Cats is subject to debate.

When cats arrived in the northern countries, most likely with human settlers, traders, or crusaders, the breed’s ancestors were probably shorthaired, since the cats transported by the Romans came from Egypt (generally) and were shorthaired varieties. The cats survived and in time adapted to the severe climate. Northern Norway, where the sun never sets from May 12 to August 1, and where the winter nights are correspondingly long and dark, proved a harsh test for these cats. Over the centuries of prowling the Norwegian forests, they developed long, dense, water-resistant coats, hardy constitutions, quick wits, and well-honed survival instincts.

The first efforts to have the Forest Cat recognized as a distinct breed began in the 1930s. However, after World War II, the breed came close to extinction. It wasn’t until the 1970s that the cat fans in Norway began working to preserve the Norwegian Forest Cat.

Solidly muscled and well-balanced, moderate in length, substantial bone structure, with powerful appearance showing a broad chest and considerable girth without being fat. Flank has great depth. Males may be large and imposing; females may be more refined and smaller.

Equilateral triangle, where all sides are of equal length as measured from the outside of the base of the ear to the point of the chin. The neck is short and heavily muscled. Nose is straight from the brow ridge to the tip of the nose without a break in the line. The flat forehead continues into a gentle curved skull and neck. Chin is firm and should be in line with the front of the nose. It is gently rounded in profile. Muzzle is part of the straight line extending toward the base of ear without pronounced whisker pads and without pinch.

Large, almond shaped, well-opened, and expressive, set at a slight angle with the outer corner higher than the inner corner. Eye color is typically shades of green, gold, green-gold, or copper. White cats and cats with white may have blue or odd eyes.

Long and bushy. Broader at the base. The length is usually equal to the body from the base of tail to the base of neck. May have guard hairs.

Distinguishing double coat, consisting of a dense undercoat, covered by long, glossy, and smooth water-resistant guard hairs hanging down the sides. The bib consists of three separate sections: short collar at neck, side mutton chops, and frontal ruff. Britches are full on the hind legs. The coat may be fuller in the winter than the summer because the dense undercoat has its full development in the winter. Softer coats may be found in shaded, solid, and bi-color cats.

Every color and pattern is possible with the exception of those showing hybridization resulting in the colors chocolate, sable, lavender, lilac, cinnamon, fawn, point-restricted (Himalayan type markings), or these colors with white. Color and pattern is often clear and distinct. In the case of the classic, mackerel, and spotted tabbies the pattern should be well-marked and even.