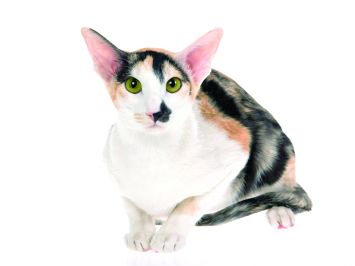 The Oriental is a svelte cat with long, tapering lines, very lithe but muscular. Excellent physical condition. Eyes clear. Strong and lithe, neither bony nor flabby. Because of the longer coat, the Longhair Division appears to have softer lines and less extreme type than the Shorthair Division.

The personality of the Oriental is as distinctive as the multicolored exterior. They are natural entertainers, full of enthusiasm, energy, and the belief that the world should revolve around them. Haughty and royal one minute, they are animated and inquisitive the next. They are highly curious, and will go to great lengths to be involved in your activities. This is not the breed for you if you work all day and have an active night life. The Oriental shouldn’t be left alone for long periods and need other cats as playmates and company for those times you can’t be with them. The Oriental craves attention; this breed needs quality time with their preferred persons. They have a real need for play, and retain that need well into adulthood. It’s wise to have lots of toys for your Oriental, or they will create their own, sometimes out of household items you’d rather they didn’t.

Orientals are extremely social, loving, and loyal, and their feelings are easily hurt if you ignore or scold them. Orientals don’t just want attention— they need it desperately if they are to live happy, healthy lives. If you provide the tender loving care they need, they’ll do just about anything to please you. Ignore them, and they become unhappy and depressed. However, when given their full share of affection, Orientals will repay you with a lifetime of love, affection, and intelligent conversation.

They usually bond with one person and become extremely devoted to and dependent upon their chosen human. Expect them to be at your side, on your shoulder, and at the door to interrogate you about where you’ve been, why you went there, and what you brought back for “me-orrr.” The breed is just as vocal as the Siamese, but range, frequency, and inflection can vary from cat to cat, and bloodline to bloodline. However, like their Siamese relatives, they are never at a loss for words on any subject.

In the past, so the story goes, blue-eyed, pointed pattern cats were owned by royalty and were kept in the Royal Palace of Siam. The Siamese breed, however, is only one of several varieties native to the area. The Cat-Book Poems, a manuscript of verses and paintings written in the city of Ayutthaya, Siam, some time between 1350 c.e. when the kingdom was founded and 1767 c.e. when the city was destroyed by invaders, describes and shows a variety of cats native to the area. These include solid black cats, black-and-white bicolor, solid brown, and solid blue, as well as cats bearing the point-restricted color pattern. The point-restricted cats portrayed in the book had slim bodies and legs, large ears, and tapered muzzles, similar to today’s Siamese and related breeds.

The first cats brought to England from Thailand were often solid brown or solid blue, or black-and-white bicolor, as well as colorpointed. These blue, brown, and bicolor cats were becoming very popular in Europe in the 1890s. However, in the 1920s, the blue-eyed pointed pattern cat became the Siamese norm in Britain, and interest in the other varieties dwindled.

The Oriental of today does not come directly from Thailand, but rather a Siamese hybrid mixed in the 1950s and 1960s. The breed’s creation was deliberate—breeders with a flair for exterior decorating set out to create a cat breed that looked and acted like the Siamese but were lavishly adorned in a wide range of colors and patterns. In the 1950s, British breeders crossed Siamese cats with domestic shorthairs and Russian Blues. In the late 1960s American breeders, fascinated by the British Orientals, took up the torch and crossed Siamese, domestic shorthairs, and Abyssinians to create a new look. Body style was not sacrificed for color and pattern, and backcrosses to the Siamese preserved type and personality traits. The Oriental breeders met with initial hissing and spitting from Siamese breeders who were resistant at best to the idea of another Siamese-type hybrid, but, since the way had already been paved by breeders of the Colorpoint Shorthair, which gained CFA acceptance in 1964, the opposition didn’t stop Orientals from gaining ground.

Orientals became popular very quickly, and demand rose for the shorthairs (at first). In 1972, CFA accepted the Oriental Shorthair for registration, and granted full championship status in 1977. Since then, the Oriental Shorthair rapidly increased in popularity, and has speedily become one of the most popular shorthaired breeds.

Long and svelte. A distinctive combination of fine bones and firm muscles. Shoulders and hips continue the same sleek lines of tubular body. Hips are not typically wider than shoulders. Abdomen tight. Neck long and slender.

Long tapering wedge, in good proportion to body. The total wedge starts at the nose and flares out in straight lines to the tips of the ears forming a triangle, with no break at the whiskers. No less than the width of an eye between the eyes. When the whiskers (and face hair for the Longhair Division) are smoothed back, the underlying bone structure is apparent. Skull flat. Nose long and straight. A continuation of the forehead with no break. Muzzle fine, wedge-shaped. Chin medium size. Tip of chin lines up with tip of nose in the same vertical plane.

Strikingly large, pointed, wide at the base, continuing the lines of the wedge.

Almond shaped, medium size. Neither protruding nor recessed. Slanted towards the nose in harmony with lines of wedge and ears. Uncrossed. Eye color green; pointed and white blue; white and bi-color blue, green or odd eyed.

Legs and slim. Hind legs higher than front. In good proportion to body. Paws dainty, small, and oval. Toes five in front and four behind.

Long thin at the base, and tapered to a fine point. Longhair Division: tail hair spreads out like a plume.

Orientals come in solid, smoke, shaded, bicolor, particolor, tabby color classes, and pointed with white, making over 300 color and pattern combinations. The Oriental’s reason for being is the coat color.

Medium length, fine, silky, without downy undercoat, lying close to the body, the coat may appear shorter than it is. Hair is longest on the tail.