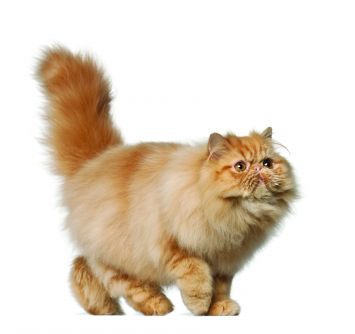 The Persian is a heavily boned, well-balanced cat with a sweet expression and soft, round lines. This cat has large round eyes set wide apart in a large round head. The long thick coat softens the lines of the cat and accentuates the roundness in appearance.

ACTIVITY LEVEL 1 out of 5

GROOMING REQUIREMENTS 5 out of 5

If you want your cats bouncing around like hyperactive popcorn, don’t adopt a Persian. Persians are perfect companions, if you like placid, sweet-tempered cats. Don’t count on using your Persian pal as a furry doorstop, however. They love to play between periods of regal lounging on your favorite davenport. Proponents say that Persians do not deserve their furniture-with-fur reputation; they are intelligent, just not as inquisitive as some breeds, and not as active.

Persians are devoted to their humans, but can be selective in conferring that honor. You must earn their trust and love. They crave affection and love to be petted and fussed over, but won’t harass you for attention the way some breeds will. They will, however, let their feelings be known if they are not getting the requisite amount of attention.

Persians have enjoyed a long reign as a favorite breed and have featured prominently since 1871. Persians have been around for much longer than 125 years. Longhaired cats, including the ancestors of the modern Persian and Angora breeds, were first seen in Europe in the mid-to-late 1500s, introduced by Roman and Phoenician caravans from Persia (now Iran) and Turkey, according to documents of the era. Researchers believe the recessive gene for long hair appeared spontaneously via mutation in the cat population in the cold mountainous areas of Persia.

An Italian traveler by the name of Pietro della Valle (1586–1652) is credited with bringing Persian cats to the European world in the 1600s. Both Angora and Persian cats are mentioned in the manuscript Voyages de Pietro della Valle. He described the Persians as gray with very long, silky, glossy fur. He noted that the cats resided in the province of Khorazan in Persia, and that they came from India with the Portuguese.

Other travelers brought Persian and Angora cats into France and then into England, causing them to be called “French cats” for a number of years. These cats quickly became popular in Britain. During this time and for centuries after, the Turkish Angora and Persian varieties (among others) were commonly mixed. At first, Angoras were preferred for their silky white coats. Eventually, however, the British came to favor the stockier version. By 1871, distinct differences between the Persian and the Angora could be seen, the former being stockier with small, rounded ears, and the latter being slender and tall eared.

By the early 1900s, the Persian had become overwhelmingly popular. Blue Persians were particularly prized, probably because Queen Victoria was the proud pet parent of two. In the early 1900s, it was decided that the Persian, as well as the Angora and Russian Longhairs, would be known simply as Longhairs, a policy that continues today. Each color is considered a separate breed in Britain.

Persians were brought to America in the late 1800s, where they were enthusiastically received. The Persian quickly shoved aside the competition and quickly took the place as the top cat. The American Persian developed a unique style and evolved into the type we see today. They are by far the most popular pedigreed breed in the North America. In North America, the Persian is considered one breed, regardless of color. Colors and patterns are divisions within the breed.

Medium height, wide, deep base. Set as much on side as top of head,
slight outward tilt.

Tail bone is usually two inches minimum, maximum length to hock
with leg extended. Some have an articulated tail, kinks and curls.

Short stand-up coat. Belly hair longer. Texture soft and wooly, having
loft. Is resilient to the touch. Coat, color, and pattern secondary to
type. Both coats facial hair is full and bushy, with downward growth
pattern. Coat separates easily and is weather resistant.