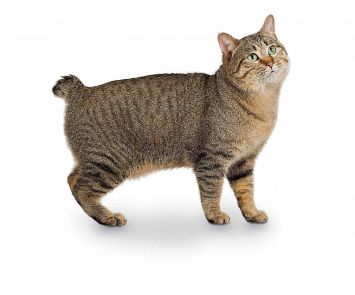 The Pixiebob is a domestic cat that has a visual similarity to the North American Bobcat.

The Pixiebob’s wild look does not reflect the breed’s personality, which is loving, trustworthy, and tractable. While Pixiebobs vary in temperament depending upon their bloodlines and mixes, most are intelligent, social, people-oriented, and curious and playful. Some tend to be more laidback with sweet and devoted personalities. Pixiebobs are intelligent, bonds well with their family, and are playful without being destructive.

Pixiebobs tend to get along well with both children and other pets. They can be leash trained easily, and love to take walks with their humans. In general, Pixiebobs become attached to the entire family and get along well with everyone. They usually don’t bond with one special person. Some Pixiebobs are sociable with people outside the family as well, while others love their families but hide under the bed when strangers come to call. Most Pixiebobs like to be close to their human families, and follow their pet parents around the house. They also enjoy children who play nicely, and usually get along well and enjoy playing with other cat-friendly companion animals, as long as the proper introductions are made.

Most are quiet; their vocalization is usually limited to chirps and twitters, although they will meow occasionally when they have something essential to say to their favorite humans. Some will have conversations with their people in quiet meows. Pixiebobs are highly intelligent and quickly learn the meaning of useful words and phrases.

Conflicting stories exist about the origin of this breed. A common legend is that Pixiebobs trace their roots to American bobcats. In actuality, this breed is simply a domestic cat with a tail mutation.

Carol Ann Brewer of Stoneisland Cattery in Washington State is credited with the origination of the Pixiebob breed. In April 1986, the foundation female was born to a bobbed tail classic tabby male that reportedly stood as tall as the knees, and a domestic female cat. The kitten had a reddish-fawn coat with subdued spotting and a face with a wild appearance, although the cat was domestic in temperament. Brewer named her Pixie. In 1987, Brewer began looking for more bobtailed cats with the distinctive wild appearance. She wanted more cats like Pixie.

In 1989 she wrote the first breed standard, which included the consistently reproduced traits of these bobtailed cats, and named the breed the Pixiebob, in honor of Pixie and because of the defining bobbed tail trait of the breed. When Brewer began seeking association acceptance for the breed, she discovered how difficult it would be to register an assumed wildcat hybrid, even though this actually wasn’t true for the Pixiebob; CFA doesn’t accept any breeds with wildcat blood, not even the popular Bengal. In 1993, Brewer approached TICA and submitted the first standard in preparation to begin the process of recognition for the breed. The breed was presented to TICA as a purely domestic breed and DNA testing for wildcat markers revealed that the cats tested possessed none. No proof existed that the Pixiebob was anything but a short-tailed domestic cat. In 1998, the Pixiebob achieved TICA championship status.

Pixiebobs can have tails of varying lengths, and some have ordinary long tails. The tail is unlike the Manx tail types; Pixiebobs are not born completely tailless like the Manx, although rarely a tail will be so short that the cat appears tailless.

Medium height, wide, deep base. Set as much on side as top of head, slight outward tilt.

Short stand-up coat. Belly hair longer. Texture soft and wooly, having
loft. Is resilient to the touch. Both coats facial hair is full and bushy, with downward growth
pattern. Coat separates easily and is weather resistant.