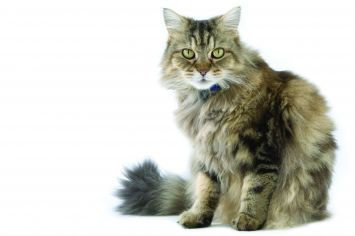 The overall impression of the RagaMuffin is one of sweetness and robust health. They are a large cat with substantial bone structure and full bodies. The large, expressive eyes strongly contribute to the overall sweet look. The only extremes in this cat are large size, large expressive eyes, and docile nature. RagaMuffins attain full maturity at approximately four years of age.

NEED FOR ATTENTION 2 out of 5

Ragdolls and RagaMuffins have temperaments that are very similar. Very lovable and attentive, the RagaMuffin is a people-oriented breed that’s cuddly and affectionate, with a tendency to go limp when held in your arms. While not overly active, they enjoy playing with their preferred people, and some will retrieve tossed toys, before settling down for a cuddle in your lap. They greet family members at the door and follow their favorite humans around the house, just to keep an eye on their activities.

Although they are not an overly vocal breed, they will speak up if they have something vital to tell you, such as the empty state of their food dishes. These cats adapt easily to a variety of environments and household situations, and are generally very good with other cats, dogs, and well-behaved children.

The RagaMuffin is not a new breed, but rather is as old as the better-known Ragdoll. The history of the RagaMuffin is intertwined with the history of the Ragdoll breed. The first cat of this breed, Josephine, was a semi-feral solid white Turkish Angora-type cat that resided in Riverside, California. One of her kittens, a mitted seal point longhair with a white blaze and a white tail tip named Daddy Warbucks, went on to become one of the foundation males of the breed. The cats that had the pointed pattern and mitted feet were called Cherubim, but others came in a variety of solid and bi-color patterns. The non-pointed and non-mitted cats were called Miracle Ragdolls. The name Ragdoll was trademarked in 1971 by the breed’s founder, but in 1975, some individuals split from the founder’s Ragdoll association, naming their new breed RagaMuffin instead.The RagaMuffin was represented as a new breed, not as a new Ragdoll color division, and therefore had to go through each phase of acceptance and meet each association’s requirements as a new breed. However, they persisted, and today all associations except CCA recognize the RagaMuffin, although TICA has yet to accept the breed beyond registration status.

The RagaMuffin has a solid base of fans who believe the breed is the cat’s meow. The RagaMuffin is similar, but not identical, to the Ragdoll because of the many years of separation between the two breeds. The RagaMuffin comes in a wider variety of colors, and the body type is slightly different.

Rectangular, broad chest and broad shoulders, and moderately heavy muscling in the hindquarters with the hindquarters being equally as broad as the shoulders. There is a fatty pad in the lower abdomen. These cats are fully fleshed and upon palpation should feel well covered with flesh. The cat has an overall balance in body size, shape, and distribution of weight.

Broad modified wedge with a rounded appearance. The forehead should be moderately rounded. Muzzle is round, slightly shorter than moderate in length, tending to broadness. The chin is firmly rounded, reflecting a proper bite. There is puffiness to the whisker pad, which results in the characteristic “sweet look” of the RagaMuffin. Cheeks are full. In profile, there is an obvious nose dip, giving the impression of a scoop rather than a break. Neck is short, heavy, and strong.

Medium in size, set as much on the side of the head as on the top of the head with slight flaring, tilted slightly forward. Ears are rounded with moderate furnishings, in pleasing proportion to the head.

Large, walnut shaped and expressive, moderately wide set, the eyes contribute to the characteristic sweet look. A slight oriental slant to the eye. The more intense the eye color, the better. All eye colors can be found, including odd eyed, aqua, and yellow/gold.

Legs are heavily boned, medium in length with the back legs slightly longer than the front legs, yet in proportion to the body. The paws are large and round, able to support the weight of the cat without splaying, and with tufts beneath and between the paws.

Long, in proportion to the body. The tail is fully furred, similar in look to a plume or soft bottle brush, medium at the base with a slight taper.

Every genetically possible color and pattern with or without white, except pointed colors. Any amount of white is allowed, e.g., white spots on paws, back, chest, or belly; blaze, locket, etc. The pattern or the white spotting may have any degree of symmetry. Nose leather and paw pads come in all colors and in any color combination, not necessarily related to coat color. Cats with white on feet may have pink paw pads or they may be bi-colored or multi-colored.