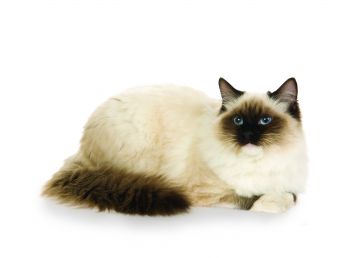 The Ragdoll is a well-balanced cat with no extreme features. They are a medium to large, moderately longhaired, blue-eyed pointed cats. The point markings may be covered by a range of white overlay patterns. Ragdolls are slow maturing, reaching full coat and color at about three years of age. The Ragdoll is an affectionate and intelligent cat, giving the impression of graceful movement and subdued power, striking in appearance.

NEED FOR ATTENTION 2 out of 5

Docile, mild-mannered, and congenial, Ragdolls make ideal indoor companions. One of the nicest features of these cats is their laid-back, sweet personality. They are devotion wrapped in silky fur, loving loyalty with gentle white paws. Very in tune with their human’s routines and emotions, Ragdolls are there when you come home at night to greet you with a leg rub, a forehead kiss, and a big purr. If you’ve had a bad day, they’ll cuddle into your lap to offer gentle comfort so that soon you’ll be smiling again. A better friend you couldn’t have.

They are playful but are not overactive. Known to adapt easily to almost any environment, Ragdolls get along well with children and adults, as well as other cats and dogs. They are easily trained to stay off the counter and are affectionate without being overly demanding. They have soft, polite voices, even at dinnertime, even though they are renowned for their enthusiasm for food. One thing Ragdolls are not, however, is impervious to pain. If you accidentally step on their tails, they’ll shriek and eye you reproachfully, just as any other cat will.

The Ragdoll is a breed whose origins are surrounded by mystery, controversy, and tall tales. Instead of facts, we have colorful stories, speculation, conjecture, and plain old fiction. Telling one from the other is easier said than done. The Ragdoll was developed in the 1960s by the late Ann Baker of Riverside, California. In fact, who, where, and when are just about the only details involving the breed’s origins that are not subject to debate. The foundation cat from which the breed originated, Josephine, was a semi-feral longhaired white female of unknown parentage. Despite Ann Baker’s colorful stories, it’s likely that the foundation cat possessed some exceptional genes, either recessive or masked by her dominant white color, allowing for some striking offspring. These striking offspring, in particular a mitted sealpoint longhaired male with a white blaze and a white tail tip named Daddy Warbucks, became the foundation of the Ragdoll breed.

In 1971, Ann Baker trademarked the name Ragdoll, and after years of selective breeding, the Ragdoll developed into the breed known today. It took many years of effort to overcome the strange tales and controversies behind the breed, but with the Ragdoll’s hard-won CFA championship status granted in February 2000, the breed was finally recognized for championship by every major North American cat association. The Ragdoll has earned a place in the spotlight, just as this cat has earned a place in the laps and hearts of people everywhere.

Large and long, broad and solid, with heavy boning. Rectangular in shape, with a full chest and equal width across shoulders and hindquarters. Body firm and muscular, not fat. Moderate stomach pad on lower abdomen acceptable. Females may be substantially smaller than males. Allow for slow maturation in young adults.

Proportionately large with a broad, modified wedge that is equilateral in shape, where all sides are of equal length as measured from the outside of the base of the ear to the end of the gently rounded muzzle. Appearance of a flat plane between ears. Cheeks in line with wedge. When whiskers and fur are smoothed back, the underlying bone structure is apparent. Slightly curving; ending in straight, medium-length nose. Chin well-developed, strong, in line with nose and upper lip. Neck heavy and strong.

Medium sized. Wide set and moderately flared, continuing the line of wedge. Wide at base with rounded tips, and tilted forward.

Long, medium at base with slight taper; in proportion to body.