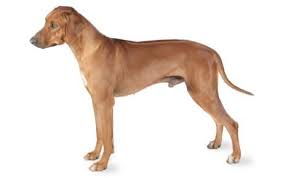 Slightly longer than tall, the Rhodesian Ridgeback combines features of speed, power, and endurance. The Rhodesian Ridgeback has an athletic build. Their stride is efficient and long. Their short glossy coat is adapted for living in hot climates. A distinctive feature is the clearly defined ridge, which starts with two identical whorls just behind their shoulders and taper to the prominence of their hipbones.

When European settlers arrived in South Africa in the sixteenth and seventeenth centuries, they brought with them such breeds as the Mastiff, Great Dane, Bloodhound, Pointer, Staghound, and Greyhound, among others. These settlers needed a dog that could be comfortable in both hot and cold temperatures, limited water, and rough bush, while performing the duties of a hunting dog. By mixing their European dogs with native Hottentot tribal hunting dogs (which were distinguished by a ridge of hair growing in the opposite direction along the top of their back) they produced just such a dog. These dogs hunted by both sight and scent and were devoted protectors of the entire family.

In the 1870s, several of these dogs were taken to Rhodesia to protect from lions, tracking them and then keeping them at bay. The “lion dogs” were so successful that they soon became popular, their distinctive ridge becoming a trademark. By the 1920s, so many different types of ridged Lion Dogs existed in Rhodesia that a meeting was held to elucidate the most desirable points of the breed, which became the basis for the current breed. Dogs meeting the standard criteria were known as Rhodesian Ridgebacks.

Rhodesian Ridgebacks were introduced into England in the 1930s and to America soon after. In both cases, they gained recognition in the 1950s and quickly attracted admirers. In the 1980s, the breed received recognition as a sighthound and became eligible to compete in sighthound field trials. Today, Rhodesian Ridgebacks are among the more popular hounds, undoubtedly because they are an athletic companion in a sleek handsome body.

The Rhodesian Ridgeback is a somewhat assertive dog. They are generally good with children, and can be protective of those in their family, but can be sometimes overly boisterous in play for small children. They are strong-willed and powerful; some can become domineering. They tend to be reserved with strangers. They often do well around other dogs, although two males should be supervised. Ridgebacks are good with cats if they are properly socialized or introduced to them.

The Rhodesian Ridgeback loves to run, and they need daily mental and physical exercise to keep from becoming bored. They can be a good jogging or hiking companion. Coat care is minimal, consisting only of occasional brushing to remove dead hair.