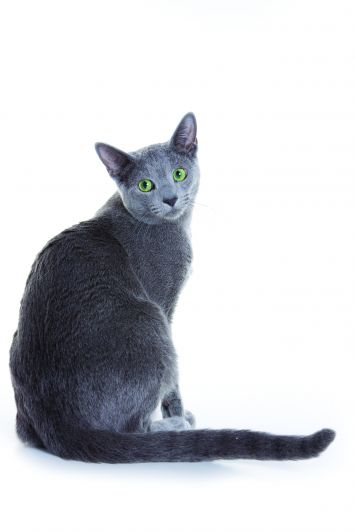 The Russian Blue cat is recognizable by his beautiful green eyes and a striking blue coat that has a lustrous sheen.

Russian Blues are known to be quiet, gentle, genteel cats, and are usually reserved or absent when strangers come to call. When they’re with their own beloved and trusted humans, however, they are playful and affectionate. Russian Blues are active but not overly so. They like nothing better than to spend time pouncing on a favorite toy or chasing sunbeams. They willingly entertain themselves, but prefer games in which their preferred people take an active role. When you’re home, they follow you around, unobtrusive but ever-present companions.

The slight upturn to the corners of the mouth make Russian Blues appear to be forever smiling. Members of this breed are generally polite, quiet, and well-behaved, for cats. It’s quite easy to teach them to stay off counters and out of off-limit areas; usually a simple “No” will do. However, Russian Blues seem to think politeness should go both ways and take offense at being made to look silly. A dignified cat, Russian Blues can be trusted to know when you’re making fun of them—and they won’t soon forget this breach in manners, either.

Russian Blues like their daily routine to be just so, and dislike household changes more than the average cat— and the average cat dislikes household changes a lot. They particularly dislike changes to their dinner schedule, and will make you aware of their displeasure. They are also fastidious about their litter boxes and will complain or may even go elsewhere if they’re not spic and span.

The most commonly held theory regarding this breed’s origin is that Russian Blues were brought to Great Britain in 1860 by British sailors from the White Sea port town of Archangel (Arkhangelsk) in northern Russia. Whether this story is true—and if true, whether the cats really originated in that area—is anyone’s guess. Their thick coats give credence to the theory that they developed in a cold climate, and, according to accounts, blue shorthairs still exist in Russia.

The Russian Blue is not believed to be related to the other three shorthaired solid blue breeds: Thailand’s Korat, France’s Chartreux, and Britain’s British Blue (now called the British Shorthair). The four breeds have distinct differences in coat type, conformation, and personality, although the Korat, Chartreux, and Russian Blue share a similar silver-blue sheen. Since all four of these breeds have been around for so long that their ancestries are shrouded in legend and conjecture, a common ancestor is possible.

In 1871 a Russian Blue was shown at the first cat show at the Crystal Palace in London, under the name Archangel Cat. At this point, Russian Blues were shorthaired, solid blue felines with foreign body types. From photos and published sources of the time, the original coat was thick, dense, glossy, and colored a light silver-blue. Russian Blues competed in the same class with all other shorthaired blues, despite obvious differences in type. Since the round-headed, cobby British Blues were favored in the show halls, the slender Russian Blues rarely won.

Finally, the Governing Council of the Cat Fancy (GCCF) acknowledged the breed, and in 1912 the Russian Blue was granted a class of its own. The breed then made progress until World War II when it almost became extinct, as did many other breeds.

The Russian Blue arrived in America in the early 1900s, but it was not until 1947 that serious attempts at breeding and promoting in the United States began. Russian Blues are now accepted for championship in all North American cat associations.

Fine boned, long, firm, and muscular; lithe and graceful in outline and carriage without being tubular in appearance.

Smooth, medium wedge, neither long and tapering nor short and massive. Muzzle is blunt, and part of the total wedge, without exaggerated pinch or whisker break. Top of skull long and flat in profile, gently descending to slightly above the eyes, and continuing at a slight downward angle in a straight line to the tip of the nose. Medium in length. Length of top-head should be greater than length of nose. The face is broad across the eyes due to wide eyeset and thick fur. Muzzle smooth, flowing wedge without prominent whisker pads or whisker pinches. Neck long and slender, but appearing short due to thick fur and high placement of shoulder blades.

Rather large and wide at the base. Tips more pointed than rounded. The skin of the ears is thin and translucent, with little inside furnishing. The outside of the ear is scantily covered with short, very fine hair, with leather showing through. Set far apart, as much on the side as on the top of the head.

Long, but in proportion to the body. Tapering from a moderately thick base.

Short, dense, fine, and plush. Double coat stands out from body due to density. It has a distinct soft and silky feel.