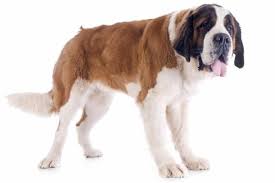 The Saint Bernard is powerful and proportionately tall. They are strong and well-muscled, necessary qualities that, in the past, helped them to travel through deep snow. Their coat comes in two types: smooth, in which the short hair is very dense and tough, and long, in which the medium length hair is straight to slightly wavy. Their expression is often thought to appear intelligent.

Around this time, the first of these large dogs arrived at the St. Bernard Hospice, a refuge for travelers crossing between Switzerland and Italy. The Saint Bernards originally came to help pull carts and turn spits and may have also functioned as watchdogs or companions, but the monks soon found them invaluable pathfinders through the deep snow.

The dogs were adept at locating lost travelers. When a dog found a person, they would lick the person’s face and lie beside him, thus reviving and warming the person. These dogs continued to serve in this invaluable role for three centuries, saving over 2,000 lives.

The most famous of all Saint Bernards was Barry, who was credited with saving 40 lives. Before Barry’s death, the dogs were known by several names, including Hospice Dogs, but by the time he died he was of such fame that the dogs were called Barryhund in his honor. In the early 1800s the breed was nearly lost. Some of the remaining dogs were crossed with Newfoundlands in 1830. As a result, the first long-coated dogs of Saint Bernard type appeared. Although it seemed that long hair would help these dogs in the cold snow, in fact it hindered them as the ice clung to their coat. Thus, these long-haired dogs did not participate in rescue work.

The first Saints came to England around 1810, referred to by many different names, among them Sacred Dog. By 1865, the name Saint Bernard was in common use, and it became their official name in 1880. Around this time, the breed caught the eye of Americans. By 1900, the Saint Bernard was the most popular AKC breed. Although they has since vacillated in popularity, they are always one of the most popular of the giant breeds.

The Saint Bernard probably has their roots in the Roman Molossian dogs, but it wasn’t until between 1660 and 1670 that the breed developed into the magnificent dog responsible for saving so many lives.

The calm, easygoing, low-energy Saint Bernard is gentle and patient around children, although they are not particularly playful. Most get along with other family dogs. They are not big barkers, but their bark is loud. They are devoted to their family and are willing to please, although at their own pace. They can sometimes be stubborn.

A Saint Bernard needs daily exercise in order to stay fit. Their requirements can be met with moderate walks and short runs, however. They typically enjoy cooler weather and do not do well in heat. Their coat, whether long or short, needs weekly brushing, more so when shedding. All Saint Bernards drool.