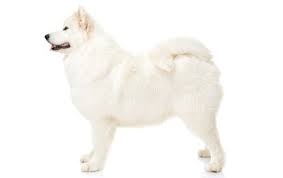 The Samoyed combines strength, agility, dignity, and grace in a general spitz outline. Slightly longer than they are tall, they are nonetheless compact. They have a strong, muscular body that is able to combine power, speed, agility, and endurance. They have a quick, agile stride with good reach and drive. Their double coat is heavy and weather resistant. Their undercoat is soft and thick, whereas the outer coat is straight and harsh, standing straight out from their body, and glistening with a silver sheen. Their expression is often animated, with the characteristic “Samoyed smile” created by the upcurved corners of their mouth.

The first Samoyeds came to England in the late 1800s, but not all these early imports were the pure white the breed is known for today. One of these dogs was presented to Queen Alexandria, who did much to promote the breed. Descendants of the queen’s dogs can still be found in modern pedigrees.

In 1906, the first Samoyed came to America, originally a gift of Russia’s Grand Duke Nicholas. In the early 1900s, Samoyeds formed part of the sled teams on the expeditions to Antarctica and shared in the triumph of reaching the South Pole. The breed’s exploits, combined with their glistening good looks, soon won the public’s attention in America, and their popularity has grown tremendously since the Second World War. Although the once nomadic Samoyed people have long since settled in one place, the breed they created has journeyed around the world.

The nomadic Samoyed people, for whom the Samoyed dog is named, came to northwestern Siberia from central Asia. They depended upon herds of reindeer for food, and had to keep on the move in order that the reindeer could find sufficient food for themselves. They also depended upon strong hardy spitz dogs to herd the reindeer and to guard them against the fierce predators of the Arctic. They occasionally helped to hunt and tow boats and sledges. These dogs lived as part of the family in the hide tents of their families, where one of their “jobs” was to keep the children warm in bed.

Gentle and playful, the Samoyed often makes a good companion for a child or person of any age. They are a closely bonded family dog. They are generally amiable with strangers, other pets, and usually, other dogs. They can be calm indoors, but this clever, sometimes mischievous breed needs daily physical and mental exercise. If allowed to become bored, they will dig and bark. They are independent and often stubborn, but they are willing to please and responsive to their family.  They may tend to herd children.

The Samoyed is active and needs a good workout every day, either in the form of a long walk or jog or a vigorous play session. They often like to pull and herd, and they prefer cooler weather. Their thick coat needs brushing and combing two to three times a week, daily when shedding.