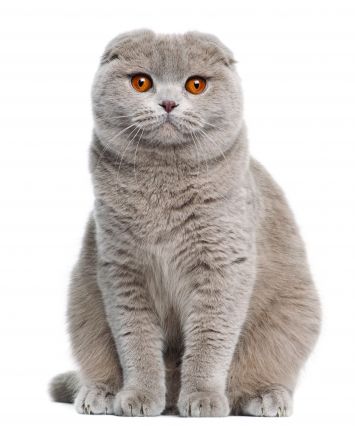 Scottish Folds are typically intelligent, sweet-tempered, soft-spoken, and easily adaptable to new people and situations. They are loyal and tend to bond with one person in the household. While they will usually allow others to cuddle and pet them, their primary attachment becomes quickly clear as they single out their chosen human. They thrive on attention, but it must be on their own terms. Despite their devotion, they are not clingy, demanding cats and usually prefer to be near you rather than on your lap. They enjoy a good game of catch the catnip mouse now and then as well, and keep their playful side well into adulthood.

Despite being folded, the Fold’s ears are still expressive and swivel to listen, lay back in anger, and prick up when a can of food is opened. The fold in the ear can become less pronounced when the cat is upset or ill. Although some Fold family members report an increased production of wax buildup in their cats’ ears, the folded ears typically do not make the cat more susceptible to mites or ear infections. The previously reported susceptibility to deafness may be related to the fact that some early Scottish Folds were white, and white cats can be prone to a type of deafness that’s unrelated to the Fold gene.

All Scottish Folds can trace their pedigrees back to a cat named Susie found in 1961 on the McRae farm near Coupar Angus, a town in Perth and Kinross, Scotland. This white female farm feline had unique, folded down ears, and British Shorthair breeders William and Mary Ross, upon seeing this unusual cat, recognized her potential as a new breed.

William Ross asked the McRaes if he could purchase the cat, and was promised a kitten from Susie’s first litter. Susie’s mother was a straight-eared white cat, and her father was unknown, so it’s unclear whether Susie was one of the first of her kind or whether the folded ears had never been noticed before. In 1963, Susie produced two folded-ear kittens, and as promised William and Mary Ross were given one—a folded-ear white beauty like her mother that they named Snooks.

On the advice of British geneticist Peter Dyte, the Rosses started a breeding program using as outcrosses the British Shorthairs that were close on hand in their cattery, and random-bred domestics. They took the name Denisla as their Fold cattery named after the two rivers, the Den and the Isla, which flowed past their cottage.

William and Mary Ross quickly realized that the gene governing the folded ears was dominant; only one parent needed the gene in order to pass along the unique trait. Any cat possessing one copy of the fold gene produced about fifty percent of Fold kittens.

Originally, the Rosses called their new breed Lops after the lop-ear type of rabbit. In 1966, however, they changed the name to Scottish Fold, in honor of this most extraordinary trait and the country in which the breed was found. The same year, the Rosses registered their Scottish Fold cats with the Governing Council of the Cat Fancy (GCCF). Along with other enthusiasts they gathered along the way, the Rosses began the process of achieving acceptance for their folded friends.

At first, a number of breeders and fanciers were enthusiastic about this new and different breed, but soon GCCF became concerned about potential health problems. At first, they were worried about ear infections, ear mite infestations, and deafness, but these concerns were proven unfounded. However, GCCF soon became concerned about genetic problems, which were, unfortunately, very real difficulties. By 1971, GCCF closed registration to Scottish Folds and banned further registration in their registry. To continue toward the show ring, the Scottish Fold had to pack up its kilts and move to North America.

All genuine Scottish Folds can be traced back to Susie. The Scottish Fold was accepted for CFA registration in 1973; in May 1977 Scottish Folds were given CFA provisional status. In 1978, the Fold became a CFA champion breed. In an amazingly short period, the Fold earned acceptance in all the North American cat associations and a place among North America’s most popular breeds. The longhaired version of the breed was not officially recognized until the mid-1980s, although longhair kittens had been cropping up in Scottish Fold litters since the genesis of the breed. Suzie may have carried the recessive gene for long hair, being a cat of uncertain origin.

Medium, rounded, and even from shoulder to pelvic girdle. The cat should stand firm with a well-padded body.  Overall appearance is that of a well-rounded cat with medium bone

Well-rounded with a firm chin and jaw. Muzzle should have well-rounded whisker pads. Head should blend into a short neck. Prominent cheeks with a jowly appearance in males. Nose to be short with a gentle curve. Profile is moderate in appearance.

Wide open with a sweet expression. Large, well-rounded, and separated by a broad nose. Eye color to correspond with coat color. Blue eyed and odd eyed may appear in all white, bicolor and van patterns.

Short, coarse legs. Toes are neat and well-rounded with five in front and four behind.

Any color or pattern with the exception of those showing evidence of hybridization resulting in the colors chocolate, lavender, the Himalayan pattern, or these combinations with white. Eye color appropriate to the dominant color of the cat. Odd eyed and blue eyed may appear in all bicolor and van patterns. Odd eyed will have one blue and one gold eye of equal color depth.

Dense, plush, even. Short to medium-short in length. Soft in texture.
Full of life. Standing away from body due to density, not flat or close
lying. Coat texture may vary due to color and/or regional, seasonal
changes.