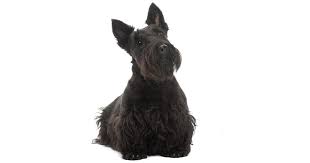 The Scottish Terrier is a short-legged, compact, relatively heavy boned dog, giving the impression of great power in a small package. Their coat is a combination of dense undercoat and extremely hardy and wiry outer coat, about 2 inches in length. Their distinctive eyebrows and beard add to their expression, which is often keen and sharp.

Only in the late 1800s can the Scottish Terrier’s history be confidently documented. Of the several short-legged harsh-coated terriers, the dog now known as the Scottish Terrier was most favored in the Aberdeen area, and so for a time they were called the Aberdeen Terrier. By the 1870s, the situation had become so confusing that a series of protests were made, ultimately leading to a detailed description of how the true Scottish Terrier should appear. Around 1880, the first breed standard was put forth.

The first Scotty came to America in 1883. They gradually gained popularity until World War II, after which their popularity soared. The most well-known Scotty in America was Fala, Franklin Roosevelt’s dog, who was his constant companion in life and buried at his side in death. The Scottish Terrier remains a fixture of the Terrier Group, always a favorite in the home.

Nicknamed The Diehard in reference to their rugged character, the Scottish Terrier is a tough, smart, determined character, ready for action. They are often fearless and feisty and may be assertive toward other dogs and animals, if not properly socialized and introduced. They can be reserved, but friendly, with strangers, and devoted to their family. Although independent and stubborn, they are often sensitive. Left alone, they tend to dig and bark.

This is a dog on the lookout for adventure, and he needs some excitement and exercise in his life every day. This can take the form of a moderate walk on leash, a boisterous game, or an off-leash exploration in a fenced-in backyard. Their wire coat needs combing two to three times weekly, plus shaping or professional grooming every three months.