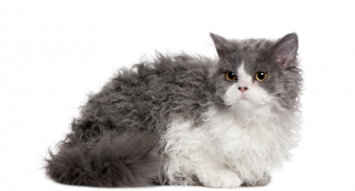 The Selkirk Rex is the result of a dominant, spontaneous mutation that causes each hair (guard, down and awn) to have a gentle curl giving the coat a soft feel. The Selkirk Rex is a medium to large cat with heavy boning that gives the cat surprising weight and an impression of power.

One may be at first attracted to the Selkirk’s cute and curly exterior, but these cats also make champion companions. Selkirks can be mellow cats with a generous measure of love and affection for their human companions. Very people-oriented, they stay loyal and loving all their lives. They are people-oriented cats that enjoy spending time with their preferred persons.

Selkirks make very engaging and loving companions. They are human-oriented, enjoy sleeping with their human companions, and enjoy sitting on or by you. They are not overly demanding of attention, but are very social and and love to interact with their people. They don’t do well in isolation.

Selkirks generally fit in well with other cats and dogs, and other family members. They have a wonderful affectionate, playful personality.

The Selkirk is the newest Rex breed to be recognized by the North American cat associations and has been around a relatively short time compared with the Cornish Rex and the Devon Rex. The Selkirk’s development and promotion were due primarily to the efforts of breeder Jeri Newman of the Noface Cattery in Livington, Montana, although many other dedicated breeders lent a hand in furthering the breed. Newman, a Persian breeder for many years, had always been fascinated by cats in general and feline genetics in particular, made it known to friends and family that she was interested in adopting cats that were in any way out of the ordinary. In 1987, the out-of-the-ordinary came to her.

At the For Pet’s Sake Animal Shelter in Sheridan, Montana, run out of the home of animal lover Kitty Garrett Brown, a cat gave birth to a litter of six—five kittens plus one kitten with a curly coat as plush and huggable as a child’s stuffed toy. Peggy Vorrhees of the Bozeman Humane Society of Sheridan, Montana brought the kitten to Jeri Newman because she thought Newman would be interested in the unusual-coated cat. Indeed she was. The blue-cream and white kitten with the alert green eyes and the extraordinary curly coat resembling lamb’s wool caught Newman’s immediate attention.

At an estimated age of ten months, the cat’s whiskers were curly, her ears were full of brillo-like hair, and her coat looked like she’d just had a perm. Newman named the cat Miss DePesto because she was always pestering Newman for attention. When “Pest” came of age, Newman bred her. The mating produced a litter of six, three of which had the distinctive curly coat. Since Newman had studied genetic inheritance, she knew this meant the gene governing the curly coat was dominant—only one parent needed to possess the gene for the trait to appear in at least some of the offspring. That litter also included one straight-haired kitten with long hair. Interesting, Newman thought. Not only did Pest carry the dominant curly-coat gene, but also the recessive gene for long hair, since both parents had to possess at least one copy of the longhair gene to produce longhaired offspring.

The breed was presented to TICA’s board of directors in 1990 and was accepted into the New Breed and Color class. The CFA accepted the breed for registration in the miscellaneous class in 1992. The Selkirk advanced to CFA provisional status on May 1, 1998, and in 2000 achieved the CFA championship status.

Medium to large and well-balanced. The substantial muscular torso is more rectangular than square, but not long. Back is straight with a slight rise to the hindquarters.

Skull round, broad, and full-cheeked in both males and females. Skull structure to be smooth and round to the touch from the stop to the back of the head as well as across the breadth of the forehead and between the ears. Muzzle is medium width. The underlying bone structure is rounded with well-padded whisker pads to give the impression of squareness. The length is equal to ½ the width. Profile shows a muzzle, clearly visible beyond the curve of the cheek. The tip of the chin lines up with the tip of the nose and the upper lip in the same vertical plane. Profile reveals a nose stop. The nose has a downward slant with a convex curve and is set below the eye line. Chin firm and well-developed, balanced in proportion to the rest of the head and should be neither receding, protruding, nor excessively massive.

Medium in size, broad at the base, tapering, set well apart. Furnishings, if present, are curly.

Large, rounded, set well apart. The outside corner is set very slightly higher than the inner corner, giving a sweet open expression to the face.

Medium length, proportionate to body. Heavy at base, neither blunt nor pointed at tip.

All genetically possible colors and patterns.

Coat texture is soft, full, and obviously curly. It does not feel or appear
to be as plush as the shorthair coat, however, should not appear to be
thin. Coat is dense and full with no bald or thinly covered areas of
the body. The coat may stand out from the body but may appear and
feel less than plush, but not close-lying. Random, unstructured coat,
arranged in loose, individual curls. The curls appear to be in clumps
or ringlets rather than as an all over wave. Although curl varies by
hair length, sex, and age in an individual, entire coat should show the
effect of the rex gene. Curliness may be evident more around the neck,
on the tail, and the belly.

Coat texture is soft, plushy, full, and obviously curly. Coat is dense and
full with no bald or thinly covered areas of the body. The coat stands
out from the body and should not appear flat or close-lying. Random,
unstructured coat, arranged in loose, individual curls. The curls appear
to be in clumps rather than as an all over wave. Although curl varies by
hair length, sex, and age in an individual, the entire coat should show
the effect of the rex gene. Curliness may be evident more around the
neck, on the tail and the belly.