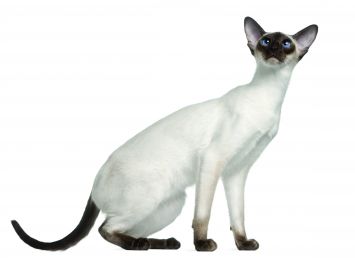 The ideal Siamese is a medium-sized, svelte, refined cat with long tapering lines, very lithe but muscular. Males may be proportionately larger. Balance and refinement are the essence of the breed, where all parts come together in a harmonious whole, with neither too much nor too little consideration given to any one feature.

Some cats seem to think that a purr or a friendly rub speaks louder than words. Meezers (as Siamese are affectionately called) are not of this school of thought and are known for their talent for clearly communicating their ideas and desires to their human servants. If you can’t be drawn into dialogue, they’re happy to keep up a running monologue for your enlightenment. No meaningless meows, these, but real attempts at communication, according to Siamese fans.

To some cat lovers, the Siamese rasp (some would say yowl) can be a bit annoying. However, Meezer worshippers wouldn’t have it any other way. According to fans, Meezers are the most wonderful, loving, entertaining cats in the known universe. Siamese are very intelligent, self-assured, playful, determined, curious, and highly active. They love their human companions with a passion; living with the Siamese is a bit like living with exceedingly active children. Except these “children” follow you everywhere, demanding to be involved in whatever you’re doing.

Determinedly social and very dependent upon their humans, Meezers crave active involvement in your life. They are super-intelligent and if you don’t give them something to do, they will find something to do that you may not approve of quite as much. This breed needs daily periods of play and interaction; it’s critical to the Siamese’s emotional and mental health and well-being. They should not be left alone for long periods; this is not a breed you can pat on the head and leave for twelve hours. Siamese will pine and become depressed if left too often alone, and may become destructive out of the frustrated craving for social interaction. The feline companionship of another Siamese or a comparatively active breed will help keep a lonely Siamese happy while you’re away, but there is no substitute for human interaction. Moreover, remember two Siamese can think up twice as much mischief to get into while you’re out earning the cat food.

This breed is not for those looking for a quiet companion—Siamese need to be treated with patience and require lots of attention and affection if they are to have the close, caring relationship they require with their human companions. For those who want a soul mate cat companion, however, this is your breed. Siamese are usually good family pets and are tolerant of children at least eight and older, as long as the children are taught how to properly handle cats and don’t play too rough.

The Siamese is one of the oldest breeds of domestic cat and has a history as long and colorful as the cat itself. The Siamese is also (arguably) the most recognizable breed on the planet. According to accounts, these sleek cats with the brilliant blue eyes and outspoken personality originated in Siam (now Thailand), where they lived in palaces and temples. They were treasured as companions of royalty and religious leaders for generations, and served as guardians of precious documents and valuables in the Buddhist temples.

These sacred cats were thought to inherit transmigrated souls en route to the hereafter. Early legends involving the Siamese are plentiful, including fanciful tales accounting for the cat’s traits. One such story tells how a Siamese temple cat, charged with guarding a valuable vase, curled its tail around the vase and stared at it with such intensity that its eyes became permanently crossed. Another tale tells of Siamese cats appointed to guard precious rings; the cats kept the rings on their tails and kinks developed to keep the rings from sliding off.

The Cat-Book Poems, a manuscript of verses and paintings written in the city of Ayutthaya, Siam, some time between 1350 c.e. when the kingdom was founded, and 1767 c.e. when the city was destroyed by invaders, clearly show cats with slim bodies and legs, and pale-colored coats with dark coloring on the ears, faces, tails, and feet. When the book was written can’t be more accurately determined since these manuscripts were handwritten on palm-leaf or bark parchment. When a manuscript became too old, it was painstakingly copied by hand when the original and subsequent copies became too old and fragile to be usable. This makes it difficult to date. Still, it’s likely the oldest document about cats in existence.

Because the Siamese was so valued in its native land the cats were rarely given to outsiders. However, it’s clear that by the 1800s the Siamese had been exported to Britain. Siamese cats were exhibited in 1871 in the first modern-style cat show at The Crystal Palace in Sydenham, London. At the event, one journalist of the time disparagingly described the breed as “an unnatural, nightmare kind of cat.” Despite this bad press, the Siamese rapidly became popular among British fanciers. At that time, the Siamese were noted for their crossed eyes and kinked tails; these didn’t become conformation faults until later. The first British standard, written in 1892 and rewritten in 1902, described the Siamese as a “striking-looking cat of medium size, if weighty, not showing bulk, as this would detract from the admired svelte appearance… also distinguished by a kink in the tail.”

Siamese must have become used to posh dwellings from its years with royalty; the first Siamese imported to North America lived in the White House. This well-documented account occurred in November of 1878, when David B. Sickels, a U.S. diplomat stationed at the consulate in Bangkok, sent a Siamese cat to first lady Lucy Hayes. In a letter that can be viewed in the Paper Trail archives of the Rutherford B. Hayes Presidential Center, Sickels wrote, “I have taken the liberty of forwarding you one of the finest specimens of Siamese cats that I have been able to procure in this country . . . I am informed that this is the first attempt ever made to send a Siamese cat to America.”

By the early 1900s, Siamese cats began appearing in North American cat shows. The breed rapidly clawed its way to the top of the cat fancy’s scratching post, and today is one of most popular shorthaired breed in North America. Due to its popularity, the breed has been used in the matrix of many modern cat breeds, including the Ocicat, Himalayan, Burmese, Tonkinese, and Oriental breeds, such as the Oriental Shorthair, Oriental Longhair, and the Balinese.

Extreme and Old-Style Siamese fanciers continue to hiss at each other over the difference in style, and it’s difficult to say who is correct. The illustrations of the Siamese in the Cat-Book Poems show cats with long, slender legs and tails; however, the body type could be interpreted as either Extreme or Old-Style, depending upon one’s point of view. Both sides agree on one thing, though: Siamese make wonderful companions.

Long tapering wedge. Medium in size in good proportion to body. The total wedge starts at the nose and flares out in straight lines to the tips of the ears forming a triangle, with no break at the whiskers. No less than the width of an eye between the eyes. When the whiskers are smoothed back, the underlying bone structure is apparent. Skull flat. In profile, a long straight line is seen from the top of the head to the tip of the nose. No bulge over eyes. No dip in nose. Nose long and straight. A continuation of the forehead with no break. Muzzle fine, wedge shaped.

Strikingly large, pointed, wide at base; continuing the lines of the wedge.

Almond shaped. Medium size. Neither protruding nor recessed. Slanted towards the nose in harmony with lines of wedge and ears. Uncrossed. Color deep vivid blue.

Legs long and slim. Hind legs higher than front. In good proportion to body. Paws dainty, small, and oval. Toes: five in front and four behind.