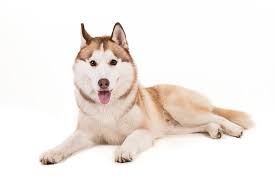 The Siberian Husky combines power, speed, and endurance. They are moderately compact, slightly longer than they are tall, and of definite Northern heritage. They are quick and light on their feet, with a smooth and effortless stride exhibiting both good reach and drive. They have a double coat of medium length, with a soft, dense undercoat and straight, somewhat flat-lying outer coat. Their expression is often keen but friendly, interested, and sometimes even mischievous.

The Chukchi people of northeast Asia developed the breed now known as the Siberian Husky. Their ancestry is unknown, but they are of obvious spitz origins, evolved over hundreds of years as a sledge dog for these nomadic people. During the Alaskan gold rush, dogs became a vital part of life in the Arctic regions.

In 1909 the first Chukchi huskies were brought to North America from Siberia for The All-Alaska sweepstakes race. Smaller and more docile than most of the other competitors in the race, they aroused little admiration, with the exception of one racer who was so impressed he imported seventy to train for the 1910 race. Throughout the rest of the year, the dogs earned their keep as utilitarian sledders, but it was in 1925 that they gained their greatest acclaim. Teams of Huskies raced 340 miles with life-saving serum for diphtheria stricken Nome, AK and were credited with saving the town. A statue in their honor stands in Central Park.

The first Siberian Huskies came to Canada, and then the rest of the United States, at around this time. The AKC recognized the breed in 1930. During World War II, many Siberians served in the U.S. Army’s Search and Rescue teams, further capturing the public’s admiration. The breed’s popularity continued to grow and now this breed is cherished family pet. They remain one of the most popular of the Arctic breeds.

Fun-loving, adventurous, alert, independent, clever, stubborn, mischievous, and obstinate all describe the Siberian Husky. This breed loves to run and will roam if given the chance. They may be very assertive toward strange dogs, but they are generally good with other dogs in the home. In fact, they are very social and must have lots of human or canine companionship. They may chase strange cats or small pets. Some are likely to howl, dig, and chew.

This is a very active dog. They need ample daily exercise, either in the form of a long jog, hike or a long run off-leash in a safe and enclosed area. They also love to pull and tend to enjoy cold weather. Their coat needs brushing one or two times a week, daily during periods of heaviest shedding.